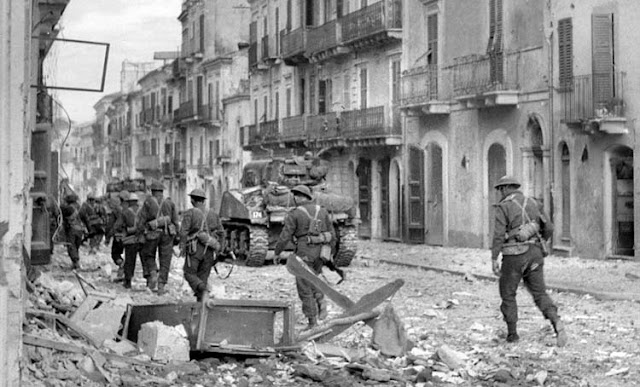 Another week has passed and with it another great game of ASL. I was only able to get one game in this week. It was also my first week back to work. Five days in and this job seems like it will be a good one.  I have never worked in the Oil & Gas Industry, so looking forward to learning its intricacies. For many weeks now, Dan and I had been playing a Monday game, but work will put a stop to that. Dan and I will try and get in a Thursday game in as we go forward. And in fact, tonight's game was started on Thursday evening. 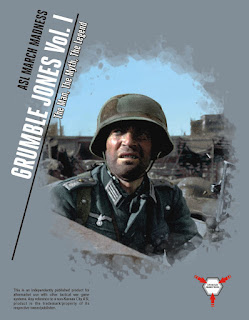 Our selected battlefield would be MM76 Illi's Block. I originally released this scenario in 2018. It got called up to the majors this year and became part of the 2022 March Madness Grumble Jones pack. This scenario is set in Ortona, Italy at the end of 1943. Ortona would be one of the toughest fights experienced by the Canadians in WWII. Their opponents in Ortona, the 90th Panzergrenadier Division and 1st Fallschirmjaeger. It's interesting to note that Cassino and Ortona, located at both ends of the German Gustav line would be tenaciously defended by German Paratroops. 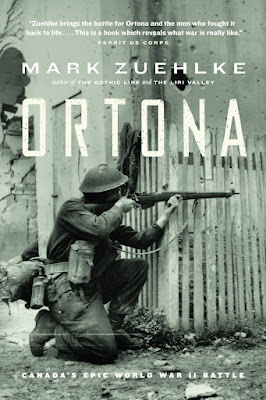 The inspiration for Illi's Block comes directly from the pages of Mark Zuehlke's excellent, Ortona. If you haven't added to this your library, you should correct that omission as soon as possible. I've not read other books on the subject, so can't say with certainty that is the best accounting of Ortona, but suffice to say, I think covers the battle as well as any book could. I don't feel that I would need any other reference for the battle.
So who was Illi? Feldwebel Fritz Illi was a platoon commander of 6th Company, 2nd Battalion, 3rd Regiment of the 1st Fallschirmjaeger Division. Illi's first jump would be on the Rotterdam Airport in 1940. This would be followed by jumps at Narvik, the Corinth Canal, Crete, Leningrad, Tobruk, the Caucasus Mountains, and finally Catania, Sicily. Most interestingly of his experience prior to Ortona would be his drop deep in the Caucasus Mountains. Illi's team would jump from the bomb bay of a Henkel 110. Their objective was a bridge on the Tehran-Caucasus line. It was not guarded and quickly destroyed. Illi's Team would spend the next 94 days walking through Russian territory to German lines. By the time he arrived in Ortona, Illi was a tough, battle-hardened veteran. Illi is represented in the scenario by the German 9-2. 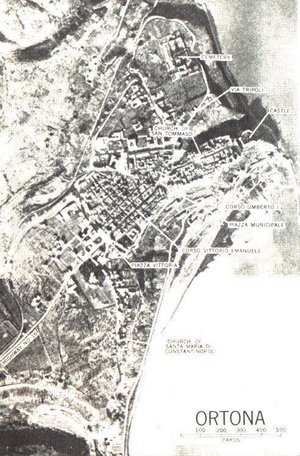 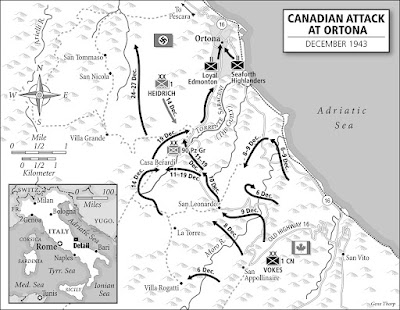 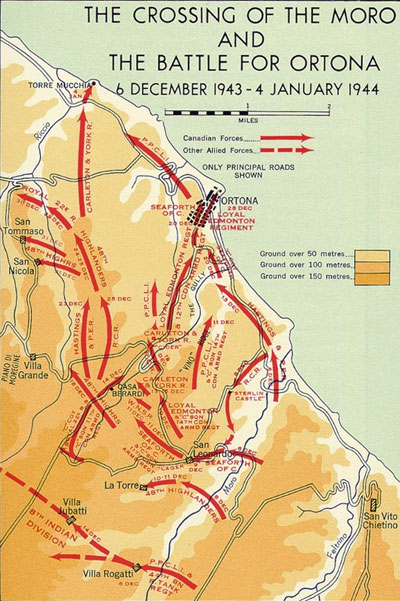 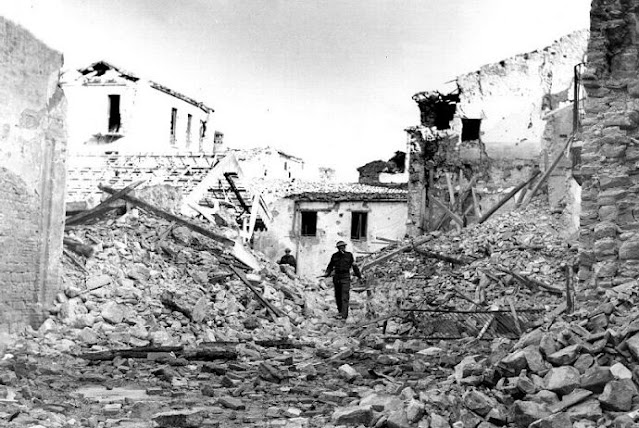 For the Canadians (The Loyal Edmontons and Seaforth Highlanders) the rubbled town of  Ortona would act a second opponent working in conjunction with the Germans. Just as the Allies discovered at Cassio, rubble would hinder the movement of men and armor alike at Ortona. Zuehlke's book does an excellent job of conveying the Canadian struggles to overcome the rubbled streets and German roadblocks throughout the town.

My attempt to properly model the terrain involved using DASL Map i. It's a great map and DASL maps bring help reduce the combat area and contributing to more up close and intense fighting. The extensive use of rubble and debris in this scenario can be a bit off-putting. I don't like overlays...but they can't be avoided in this instance...and there are a lot of them. I even missed putting one on the map. E2 is supposed to be rubble, but you will see in the AAR pictures that I neglected to properly mark it. We did play it as rubble during the game. Some of the feedback from the Kansas City play testers indicated a dislike for the amount of rubble and just how difficult it was to move around. But I'll admit that upon learning of that...I thought to myself...mission accomplished, as that is exactly how you should feel when playing this scenario and trying to overcome the terrain to get at your German opponent. 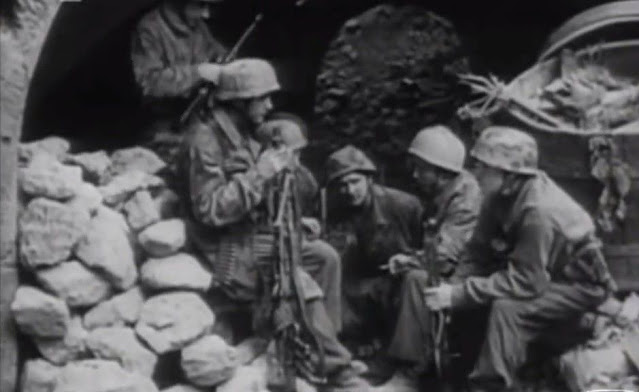 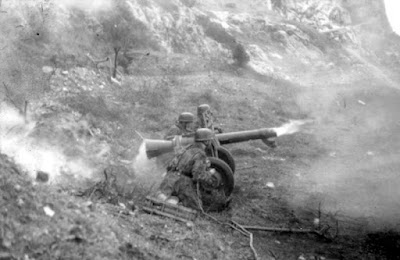 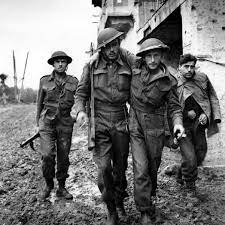 And now for Dan's Pre-Game Comments:
"The British attack plan is to assault the G3/G4 building and use it as a base to attack the I4 building.  From the I4 building the British will clear the victory areas of German units.  Hopefully the tanks can get smoke to cross the row H road."

To win the scenario, the Canadians must ensure that there are no good order Germans on or adjacent to Hexes H1, H4, and L3. No easy task to be sure. The factory roof in the German rear is in play. And the M2 Building is a 3 level building. These give the Germans great visibility to the approaching Canadians. I would forgo the M2 building location, but would put my 75* Recoilless Rifle on the roof of the factory.  Overall, I would go for an upfront defense and try and hold the G Row buildings for as long as possible. 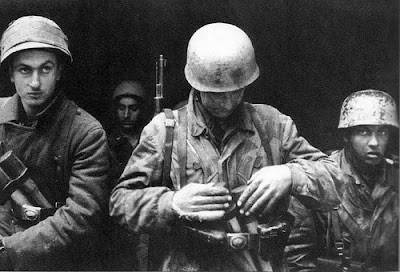 The German 5-4-8 is one of the stronger squads in ASL.

When you are playing on a 5 Hex wide board...every attack is a Schwerpunkt!! Dan's first act would be to smoke my 9-2 location, which he had correctly guessed.  He would then begin his general assault. In Advancing Fire Dan would fire his flamethrower at F3. He would roll a 10 and X out his flamethrower and eliminate a stack of Dummys. 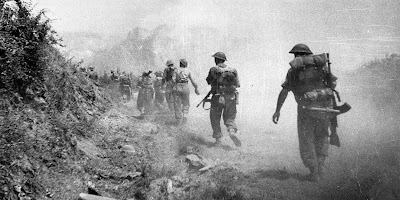 I would get some hits on Dan's advancing half-squads, but in general Dan made good progress. He would go hand to hand in F2. This would eventually cost me two squads. 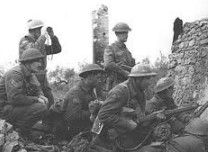 Turn 2 Canadian - my 75 RCL would get a good hit as one of the Shermans began lobbing shells at it. 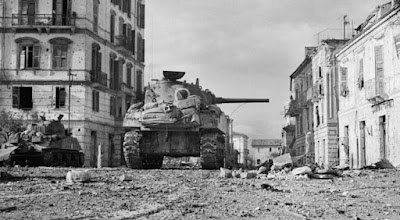 A look at Dan's penetration after two movement phases. 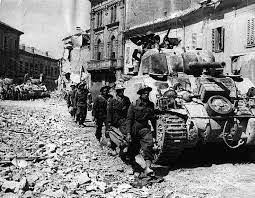 Turn 3 Canadian - Dan presses his attack on the G Row buildings. Dan had secured F2 and at this point, I had lost three squads or a 1/3 off my squads. But the Canadians were down 4 squads at this point. Dan's DC toting squads would try to place DC's, but either be pinned or broken in the attempts. Dan would place one DC successfully in the course of the game. The Canadian sniper would not make an appearance in the game despite several activation rolls. The German sniper would show up at least three times and ultimately KIA the Canadian 8-1 and a 2-4-7. Again Zuelke's book gives some good detail on the effectiveness of German snipers at Ortona. 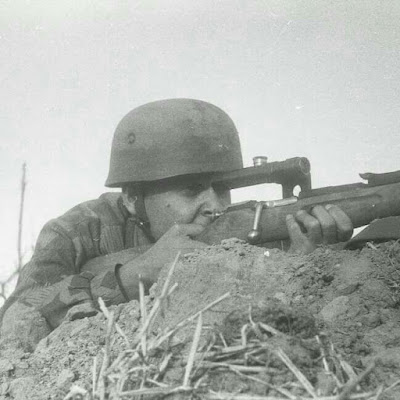 Little things like the German sniper, the loss of the flamethrower and the failures to place DC's would join together with several bad boxcars were beginning to stack up and hurt the Canadian effort. 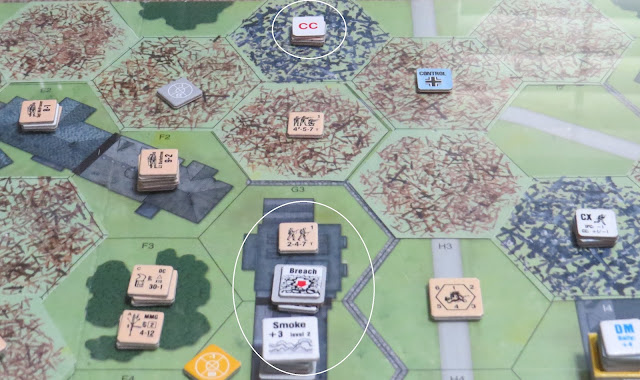 By SSR, the Germans are able to place up to two breach locations across Row House walls to reflect the mouse holes employed by the Germans at Ortona. The only place to place those is between G3 and G4.  By Turn 3, Dan in G3 and was nearing the Row H victory locations. 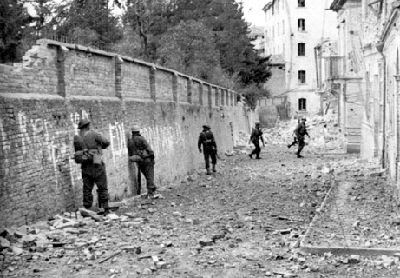 Turn 4 Canadian - Dan smokes my boys in the F4 location, while his other Sherman continues lobbing shells at my 75 RCL. 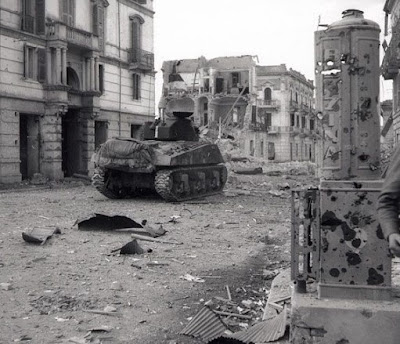 Turn 4 would see the first Sherman move up to the H Row. This would cut the escape rout of my boys still fighting in the G Row building. 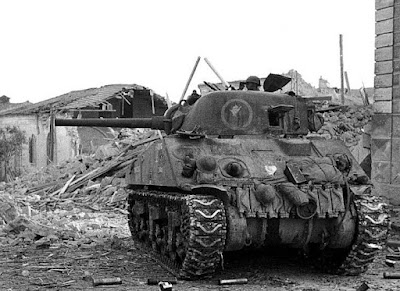 As we headed into Turn 5 Canadian, the first Sherman had been knocked out by a Panzerschreck. The remaining Sherman would take up a hull down position in G5. The Canadians were in control of the G Row buildings and trying to push forward. 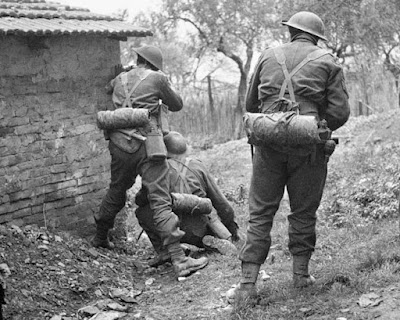 The Canadian advance had been costly as several half-squads had been eliminated in Turn 4.

On the German part of Turn 5 (last German movement phase), my boys would destroy the second Sherman with the other Panzerschreck team. I would then fall back to the L Row and send other boys into Close Combat with Canadians in the H Row. 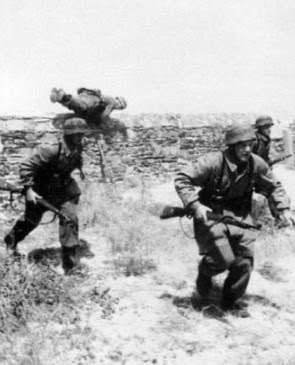 Dan would complete his Prep Fire Phase in Turn 6 and then call it quits and offer the concession. Only one of the three victory locations met the victory conditions. And the other two could not be taken by the remaining 2-4-7, which was the only available Canadian unit to move. It had been tough game for the Canadians with heavy losses sustained in Turns 4 and 5.
Dan and I would roll more than a few boxcars during the game, but they would impact Dan's boys the most. And yes, there would be a few snakes as well with some critical hits and the creation of 2 fanatic squads and 3 Heroes. All in all, this was a fun game. The action was intense throughout the game. My thanks to Dan for a great game.

And now for Dan's Post Game Comments:
"The plan did not work.  The German up front defense inflicted significant casualties.  The FT was lost on the first shot and the DC troops broke before placing their charges.  Turn 4 was especially deadly with several HS being eliminated.  The Germans were also able to kill both tanks with PSK.  Well played by Grumble Jones for the win.  Another loss for those who would beat the scenario designer." 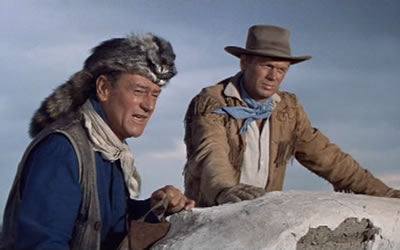 My buddy Dan will be heading to the Texas Tournament next week.
I wish Dan and all the tournament attendees good luck and low rolls!
Dan and I will return the 25th of June.
We will see you then!

Posted by GrumbleJones at 2:12 AM