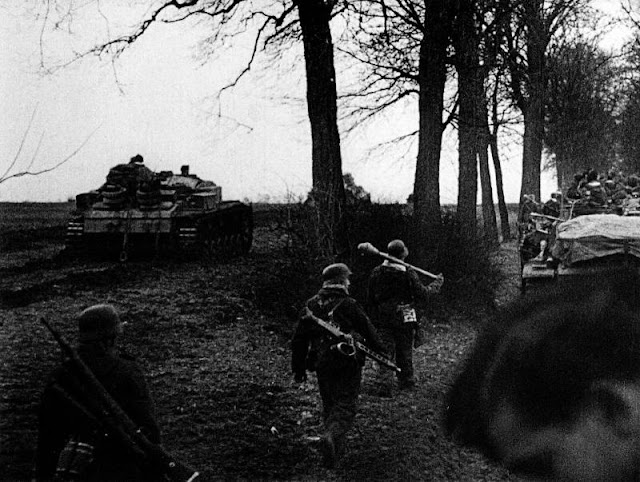 The past week was very interesting with a lot of ASL played. Dan I would play on Wednesday evening and again on Thursday evening. Our Wednesday game would be GJ097 Bandengebiet Hide & Seek. It ended up being a fun scenario. I would lose as the Partisans, but it was great little game. On Thursday, Dan and I would play Schwerpunkt Scenarro SP12 Piano Lupo.  This game wasn't quite as much fun as the Wednesday game. I managed to win, but didn't feel all that great about it. But a game of ASL well played or not is always a good time! So far in September I have played 13 games...good grief is that of ASL...and I'm not done..14 is up at 2:30 today and 15 is tomorrow and 16 is on Tuesday with the possibility of 17 and 18 before we hit the end of the month. That is is just crazy!!!

"I have only just begun to defile myself!!!" 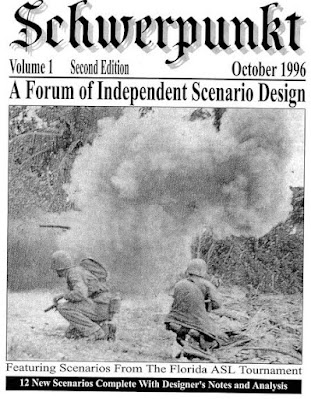 Our Saturday game would be Schwerpunkt SP11 Pomeranian Tigers. Designed by Bob Walden, this scenario covers the actions of the Germans as they sought to cut off the Russian advanced into Pommerania. ROAR has this scenario with 65 Russian wins and 55 German wins.
To win the scenario, the Germans must exit 40 VP off the north edge.
This scenario also brings the heavy armor with King Tigers and IS-2's.  It's always fun to play with the big guns...but on a single board...it might just too close for comfort. 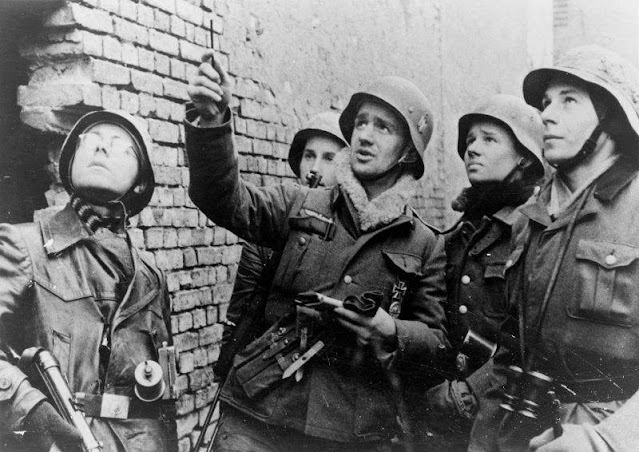 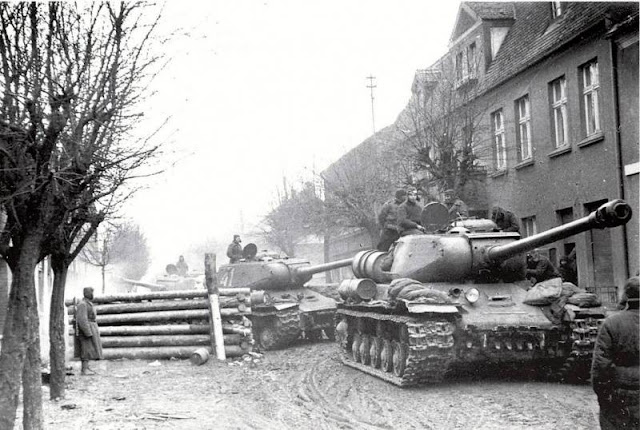 The stream is a paved road. Level 2 hills are level 1. The Russian mines must be placed on the road and the terrain is not good tank country...at all...

And now for Dan's Pre-Game Comments:
"The Russians must prevent the Germans from exiting without losing too many tank and other CVP.  The plan will be for the 8-1, squad and MMG to set up in building S4 with the AT gun in building S5.  The 7-0, squad and LMG will set up in S7.  A squad and LMG will set up in building U3.  The final squads will set up in X2, V6 and X9.  With dummy units in Z4, Z7 and W5.  The mines will be in W1, W2 and W10.  Hopefully these slow the Germans long enough for the reinforcing tanks to get into position behind the wall in T5 and T3.  The final tank will try for S9.  It will be a challenge for the tanks to make their positions if the German assault in on time."

By SSR, my Germans had to enter on the road. I would move in stacks as the Russians had no LOS to me.

Turn 1 German - I move up the middle and fan out to either side. The terrain is just awful...

After 1 turn, Dan and I are staring at each other, but nobody is blinking or giving up their concealment. The 57LL AT Gun did fire when one of my Stugs entered its bore-sighted hex.  But Dan would roll and 11 and on the very next shot from the AT Gun...roll a 12. He would then six it on a repair roll and that was all she wrote for the 57LL AT Gun. 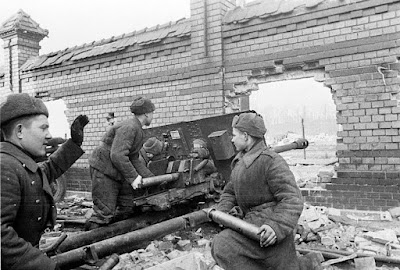 Dan had begun the game with some bad rolls and it cost him his only Anti-Tank asset at the start of the game.

Before I knew it, it was already Turn 3 and time to bring on my reinforcements...KING TIGERS BABY!!! Up until this point, I was moving very cautiously and not taking any risks. That would prove to have been a mistake. I really needed to be at the bridge by Turn 3. Other than MALF'ing his 57LL AT Gun, Dan's force was completely intact and ready to hurt me.

So...I would finally take a chance and move to contact with Dan's boys. And I would promptly lose a STUG to a street fighting 6-2-8. Great...just great. My King Tigers would roll on with Paras riding on both.

At the end of three...I was a long way from the exit. On the plus side, Dan rolled a 6 on the 57LL AT Gun repair attempt. So it was out of the game.

Turn 4 German - I manage to get through the Russian MLR  on the west edge and the rest of my boys plunged into the center. 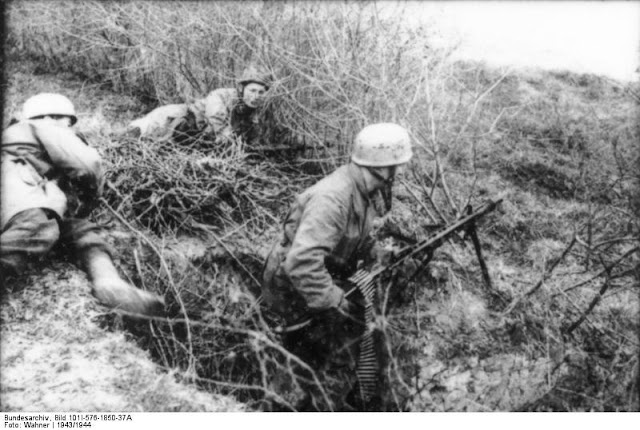 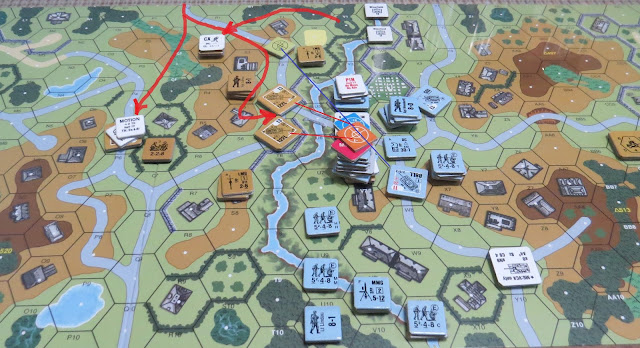 Turn 4 Russian - The IS-2's roll on. But my lead King Tiger had MALF'd its MA shooting at the Russian MMG position. And I failed to repair it in Rally Phase. I was done for. 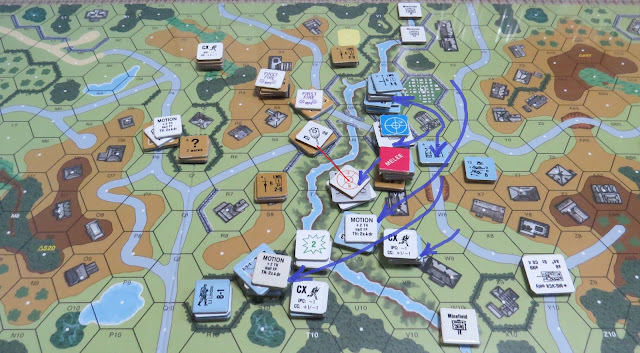 Turn 5 - my King Tiger with the MALF'd MA is knocked out and the crew gunned down as they got out. I'm stuck in Melee near the bridge....cause I can't ever seem to close the deal in CC these days. I sacrifice another STUG, which allows my last King Tiger to get across the stream/ROAD. Despite this good penetration...Dan has my bottled up in the center. 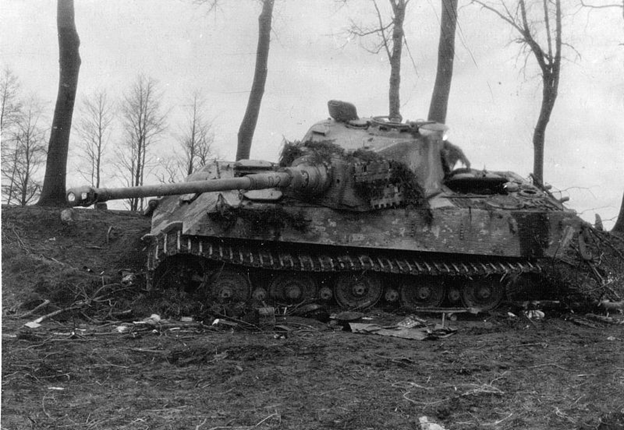 Losing my King Tiger as it sat there helpless gutted me. There really are times when ASL feels like a sadomasochistic exercise. I mean what other game so often just takes away your firepower with an arbitrary dice roll. "Oh...I'm Sir Henry, your Queen failed in the attempt to take my Pawn." In a tight game like this one, losing my King Tiger without it doing anything was a death knell for me. I was down to a single King Tiger and STUG 105 and was faced with three IS-2's in hull down or otherwise advantageous positions. Dan simply had to wait for me to move into his sights.

So after 5 Turns...I was simply not far enough along and Dan's boys had a good defensive screen that would make me pay to break out. 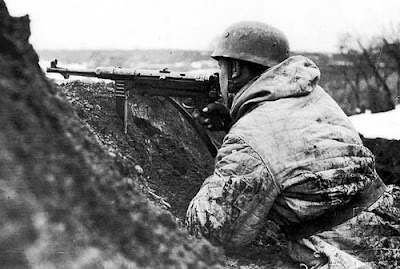 I took a series of desperate Panzerfaust shots from inside the buildings that missed and broke my boys. My spirit was also broken. I'd had enough. It was pretty clear that I wasn't going to make the exit and even if I did, I didn't have the VP necessary for the win. Dan's defensive effort had been too much for me. Dan had suffered some bad breaks early and then my turn came and it was just too much for me tonight. So I gave the concession and congratulated Dan on whipping my backside pretty good. I should have been much more aggressive in the beginning, especially when the AT Gun broke. After losing a STUG to street fighting I got too cautious...but that was the wrong thing to do. I needed to be in position to defend against the IS-2's and instead I gave them the hull down positions. Dan played a great game and earned a great win. 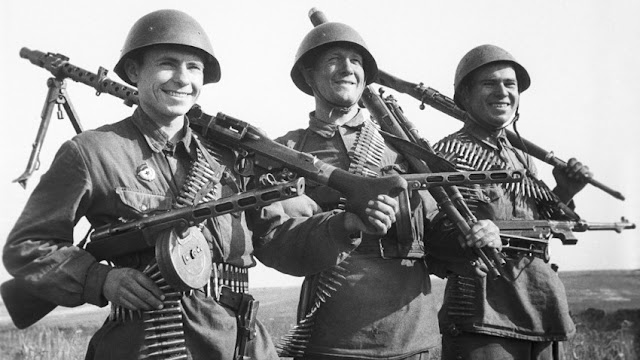 And now for Dan's Post Game Comments:
"The plan worked.  Mostly due to both sides rolling bad.  But the Russian rolls improved as the game went on and the Germans got worse.  The AT gun was lost to rolling boxcars.  But so did one of the Tiger tanks.  In the end the Germans could not get past the Russian tanks with enough CVP.  My thanks to Grumble Jones for a great game of ASL!"

Dan and I will be back again next Saturday for more EXPLOSIVE ASL Action!!!
We will see you then!!!
Posted by GrumbleJones at 8:38 PM