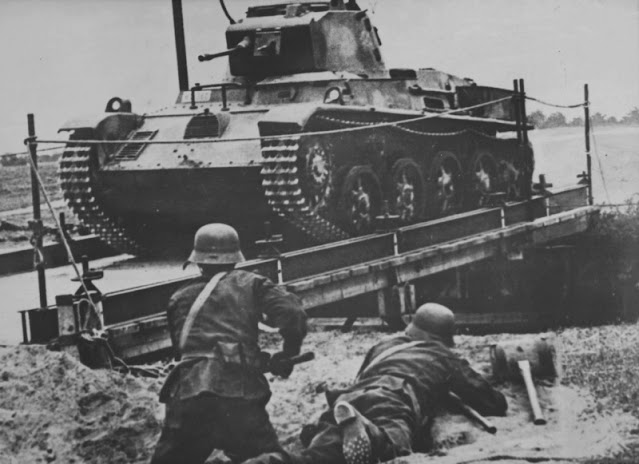 Another week and Spring has sprung in Western Illinois. It's been nice to have the warmer temperatures and the chance to walk more frequently. The older I get the less I like being cold. My job search continues to confound and deeply depress me. Three rejections this week and one after two interviews and a feeling that I had a good chance at the job. That really hurt...ego crushing in some ways. I reached a point on Wednesday that was not a good place to be. My sense of worth took a major hit. The HR manager for the rejecting company reached out and wanted me to link up with him on Linkedin for other "opportunities". I replied with a question. Essentially, I said to him...why bother...of what value would I have for future opportunities when I couldn't pass the grade for a job significantly below my current one?? Yes, that's probably the wrong response, but to his credit he linkedin with me anyway.  I share this stuff, because I need an outlet and because it unfortunately affects my ASL life. I'm struggling to enjoy ASL as much, because I have too much other worry and baggage in my head. ASL requires a lot of focus and my focus has clearly been lacking of late. Tonight's game highlights that to some extent and also exposes a weakness that I have for not being able to see how to defend a position. 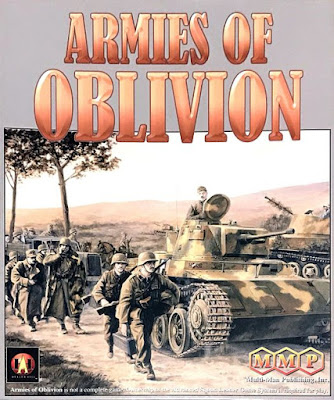 Dan would choose tonight's scenario and his choice would be ASL Scenario 111 Balkan Sideshow (designed by Brian Martuzas).  And now let me say a few words about Brian. Brian is one of my friends on Facebook from the greater ASL Community. Like myself, Brian has been trying to navigate the world of unemployment. Brian has been incredibly supportive in posts to me about hanging in there and not letting this current situation overwhelm me. So Brian...thanks Man! I really appreciate the positive outlook!
Dan is currently working through the AoO scenarios, which neither of us have played. I only got AoO myself about two or three years ago. It was a module long in the coming to my collection. It's certainly an outstanding addition to ASL, but I do find myself struggling to play Axis and Allied Minors well. And tonight's game would be no different. Oh and 2 ELR with Allied Minors...ugh is that tough on you!! 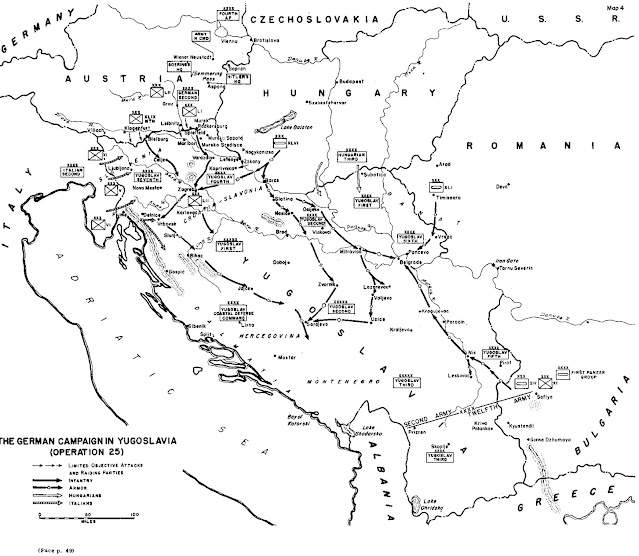 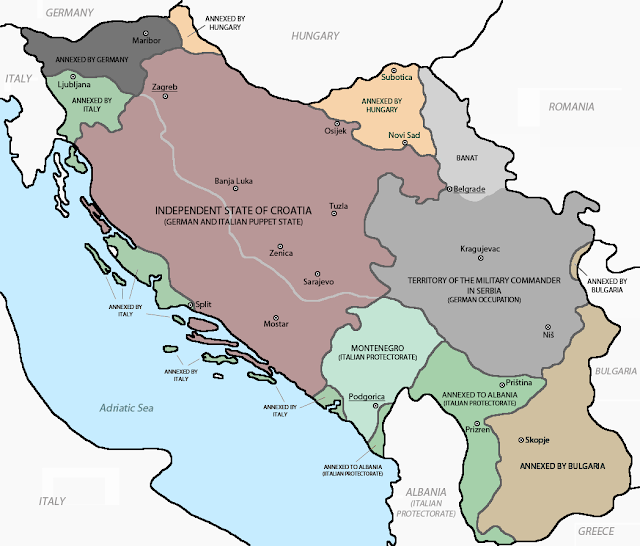 Balkan Sideshow covers an action during the Invasion of Yugoslavia in April 1941. The scenario is based on an engagement between Hungarians and Yugoslavians for control of the bridge at Szenttanas. The retreating Yugoslavs made a stand to hold the bridge against pursuing Hungarians with armored cars, light tanks, a gun battery and lots of horse mounted troops. Historically, the Yugoslavs dealt some punishment, but the Hungarians eventually overwhelmed them. ROAR has the scenario with 12 Hungarian and 21 Yugoslav wins. I always hate not winning a scenario where ROAR shows my side having the advantage. 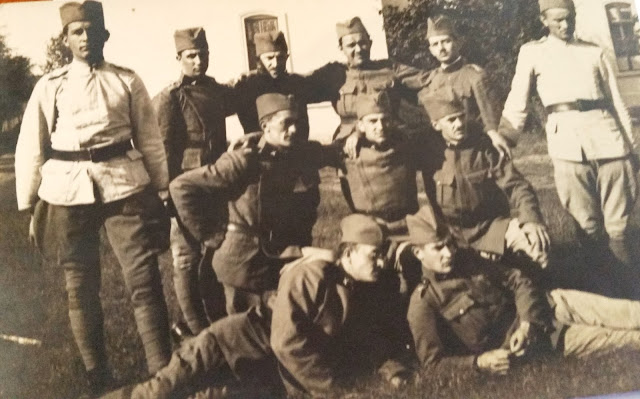 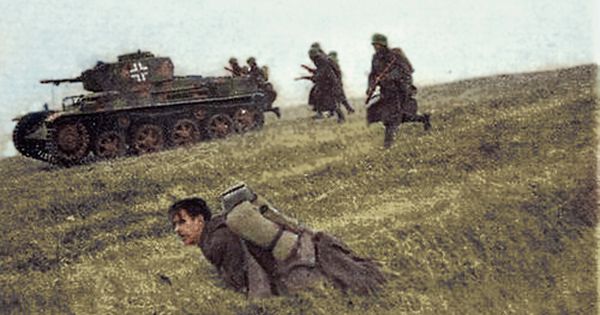 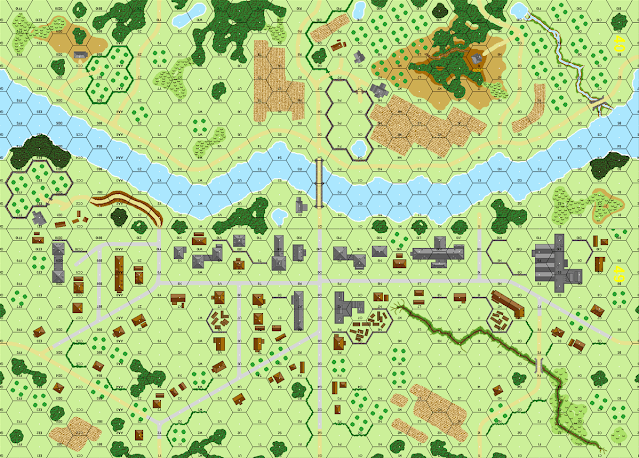 My plan was to put dummy units on the flanks of Board 40 along with both wires to block the flank roads. The bridge would have 2 x AT Mines in each hex. The bunkers were oriented to control any attempt by the Hungarian Cavalry to swim across the river. My AT Gun was set behind the stonewall in the orchard to get rear and side shots as Dan swept towards the bridge. It almost sounds like I knew what I doing...almost..

And now for Dan's Pre-Game Comments:
"The Hungarians must overrun the retreating Yugoslavians and clear all areas within three hexes of the bridge.  The armored cars will enter and try to block the bridge.  Then the three radio less tanks will attack up the middle working to overrun the remaining Yugos.  Two tanks will attack on the flanks along with the artillery pieces.  A platoon of cavalry will also try to swim the river on each flank as well one led by the 8-1 with both LMGs the other led by the 7-0.  While the 8-0 attacks in the center with the engineers.  After the north side of the river is clear the tanks will brave the mines and try to cross the bridge.  Hopefully the AT gun can be suppressed by tanks fire from across the river." 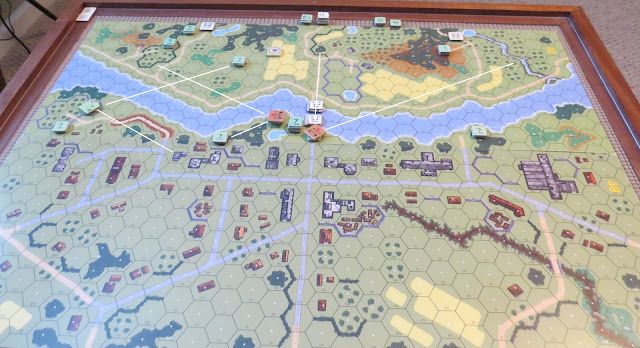 A look at my Turn 1 dispositions. I planned to run as many of squads to the bridge as possible and then leave a delaying force in the center to slow down Dan's advance. 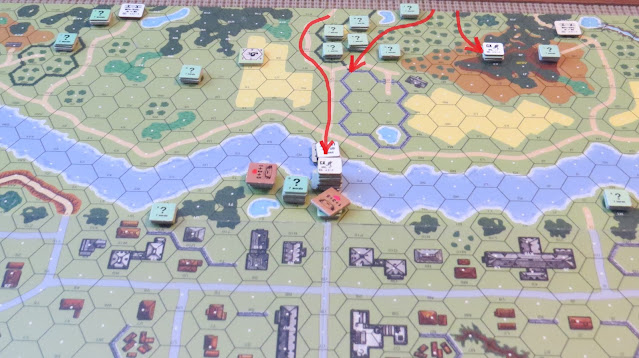 I managed to get onto the bridge with road bonus and in Advance Phase would enter the second bridge hex. 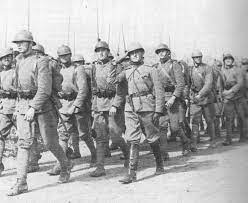 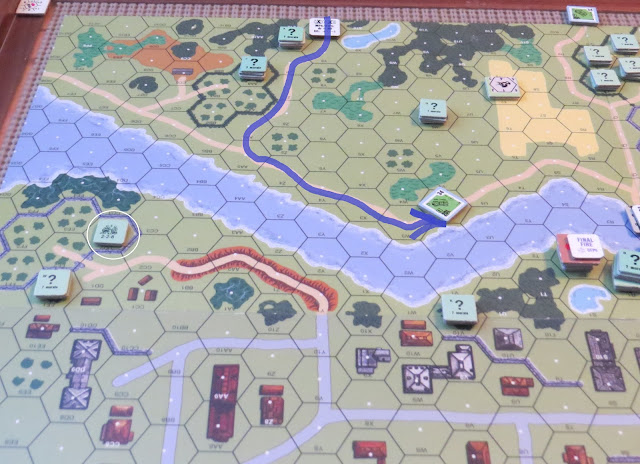 Ok...Dan's two armored cars come on and yes, I got the shots I wanted...but missed and then I did...I went for Intensive Fire...I'd been pretty lucky with it lately...well that would be a catastrophic mistake...(I know Roy Connelly...I never listen...) 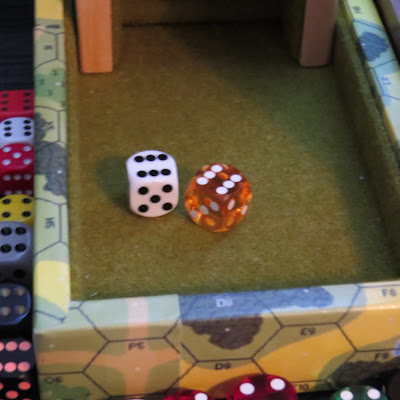 Yep...I rolled the Grumble Jones special...boxcars...and no more AT Gun. And yes...I lost the game right there. You can stop reading now...cause...the rest of this AAR is just me getting rolled over... 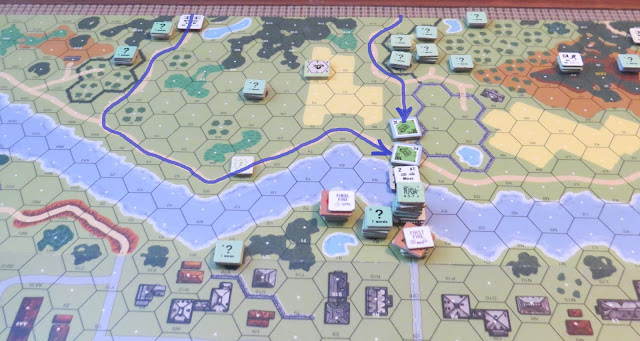 Dan positioned the armored cars beside the bridge. He knew the mines were there and this move would screw up any fire lanes from the MMG in the pillbox and would keep anymore of my boys from retreating across the bridge. It was just all around bad. 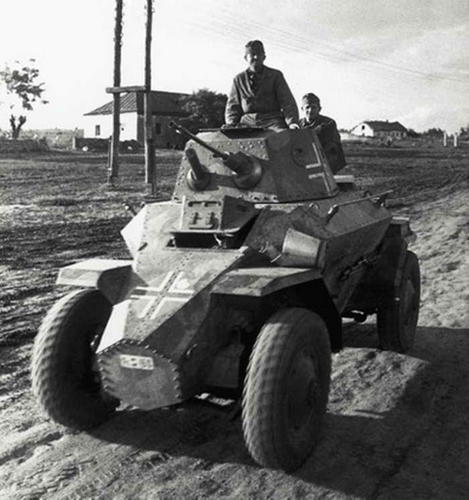 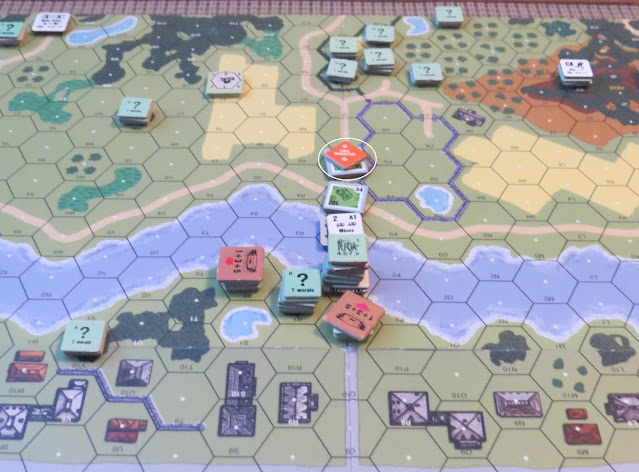 Dan would break the CMG on one of the Armored Cars. 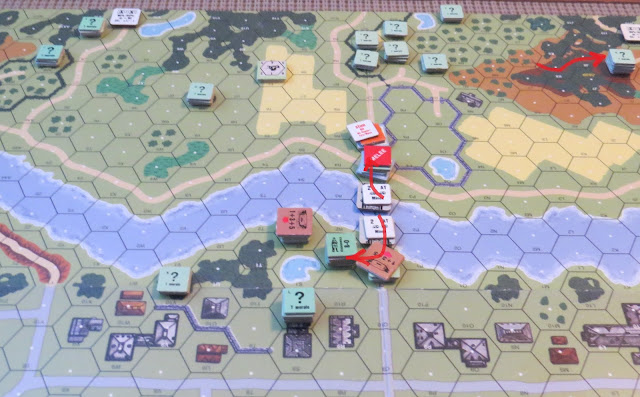 My boys who had reached the bridge would be broken by the armored cars and forced to rout. I had moved one 4-5-7 to get into Close Combat with the nearest armored car. I would succeed in immobilizing it, but were held in Melee. 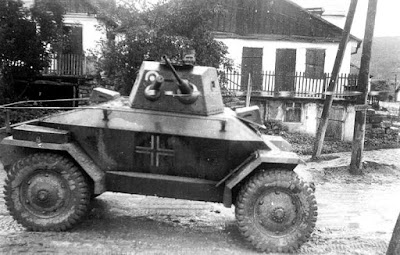 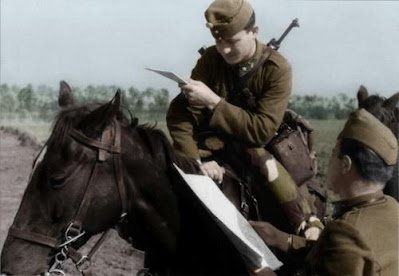 Tanks Tanks fly around the flanks and surround me in the top center. 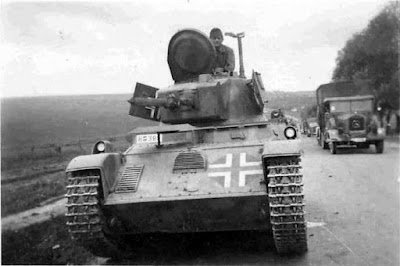 I do succeed in breaking some squads and my single 4-3-7 holding the right flank manages to break two of three mounted squads. 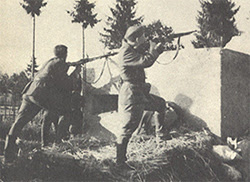 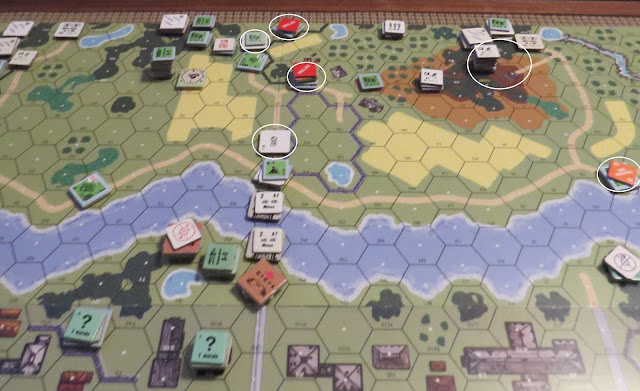 Turn 3 Yugoslav - I managed to destroy one of the armored cars with the MMG. Dan would MALF another CMG, but would take prisoners across the battlefield. I send three squads into CC with Hungarian tanks. I pass every PAATC and destroy one of the tankettes. The other two units are held in Melee. Dan also begins taking his first of many Yugoslav prisoners. 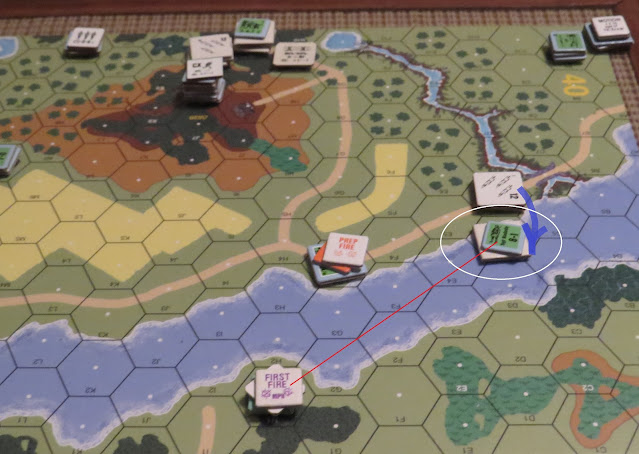 ASL is truly a game of random events. You fire a 16 factor fire shot at -2 and you roll an 11. You shoot a 2 factor shot at -1 and you roll a 3...never fails.  Such would happen to Dan as his 8-1 and a squad tried to swim their horses across the river. The 8-1 survived, but the squad broke and slipped under the water. You don't want to break when you are in the water. But a 2 down 2 shot wasn't a huge risk...especially when Dan had seen me rolling 8's, 9's, 10's and 11's all night. Honestly, ASL can get too random in results for enjoyment at times. For much of tonight's game, Dan was able to do most of what he wanted as I rolled badly...but then he does the one dangerous movement of a stack and whamo I roll a 3 or a 2. Sometimes...I don't get it...I just don't get it...

Well...at least Rhianna makes me forget what I was whining about...

So...this one time I placed AT mines on two bridge hexes and watched a tank roll through both hexes as if there was nothing there...yeah...that was fun... 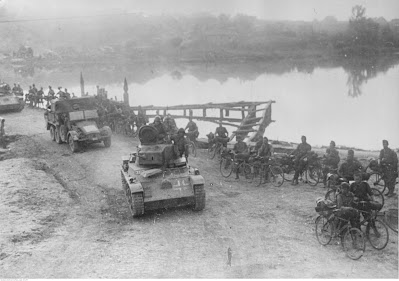 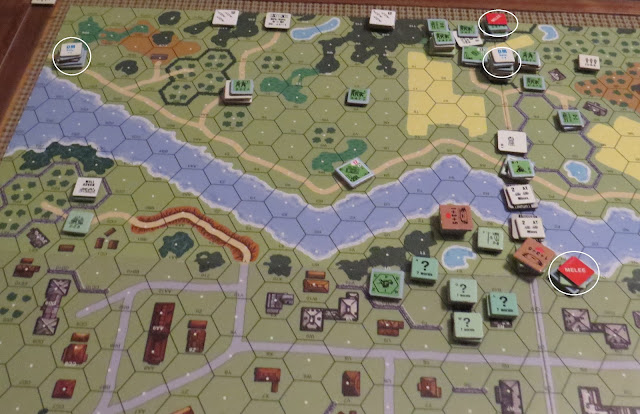 So...the game was quickly slipping from my grasp...but I was still throwing some punches. My MMG in the left bunker would immobilize a truck hauling one of the ARTy's and break the crew. That was good. In the center, the Hungarians were mopping up my remnants. Overall, things were getting bleak for my boys. 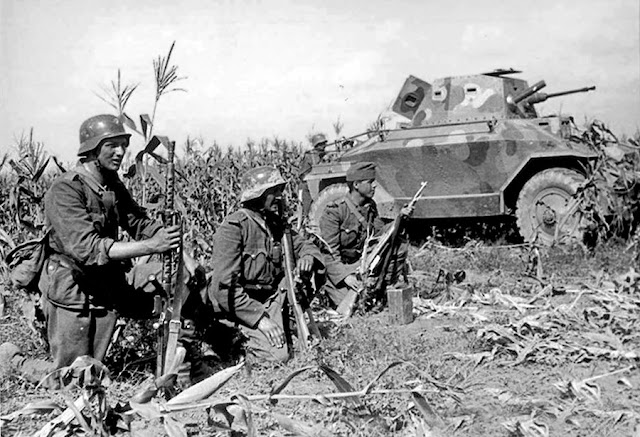 Dan's Hungarians were steadily taking control of the battlefield. 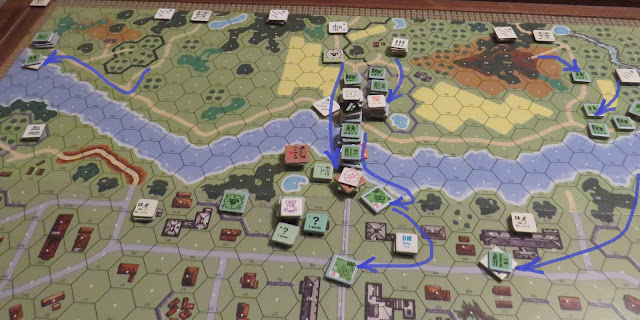 Turn 5 - Dan is across the bridge in force. He managed to break my squad with the MMG in the bunker at the end of the bridge with the ATR on the Armored car...yeah the one that I failed to destroy way back on Turn 1. He gets a hit with 1 factor...and breaks me. And yeah...this is what happens in ASL...the improbable becomes the probable and the probable becomes the improbable. With that MMG down, Dan surged across the bridge. Dan would clear one hex of mines, but the second mine hex would destroy one tank and immobilize another. But it was too little too late, Dan's infantry were moving across the bridge and I was not able to stop them. 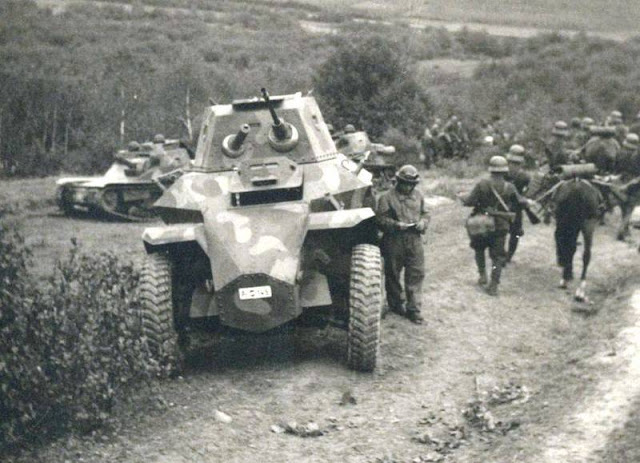 As I pointed out early in the AAR, my failure to take down the two armored cars was really the moment that I lost control of the game. Losing my AT Gun was just a disaster. Without it, I really lacked an effective means for stopping Dan's armor. And the armor made it possible for Dan to reach the bridge and too get across. In retrospect, I should have put both wire counters on the bridge. Sometimes I really fail to see the obvious...

A last look at the battlefield. So, the clock was approaching 10:00 PM...and we had been playing for a solid 5 hours. This scenario is 10 turns and I do think my Yugoslavs would have held out for another 2-3 turns, but it was inevitable that Dan's force would eventually overwhelm me and at the very least force me to rout away from the victory zone near the bridge. I was tired, frustrated with my poor performance and so gave the concession at the end of Turn 5. Dan had me and I could see no reason to drag it out. This is a good scenario and is a fun scenario. It has a lot of moving pieces and Dan and I had fun playing it. We had some strange occurrences as well...my 6+1 battle hardened and became Heroic...never had that happen before...and Dan would see a broken squad be eliminated for breaking in the water...which was new for both of us. So inspite of my bad mental outlook...it was still a great night of ASL. Yes, I whine incessantly about bad dice rolls...it's what I do...and doggone it...I'm good at it!

And now for Dan's Post Game comments:
"The plan worked.  Mostly due to the loss of the Yugo AT gun on turn 1 allowing free use of tanks.  The low Yugo ELR also allowed the taking of many prisoners and quick mop up of the area north of the river.  Battle around the bridge turned into a slugging match but two tanks made it across and forced the rout of broken Yugoslavs.  A lucky shot on the pillbox also helped.  This scenario is old school grinding fight with lots of low firepower shots deciding the match.  My thanks to Grumble Jones for a good old fashioned game of ASL!" 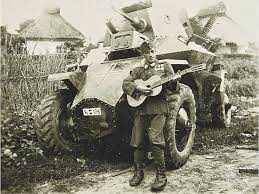 Dan's 8-1 Armored Leader sang a little tune from Queen..."We are the Champions...my friend!" Yep...my congrats to Dan on a good victory. He did what good players do...take advantage of your opponent's ineptitude and BALE SOME HAY!!!

I may have gone down this time to the hay bale Schwerpunkt...

But I'll be ready for more in your face ASL next week!!!

Dan and I will be back for more arresting ASL next Saturday...until then stay safe...stay healthy and keep rolling the dice!
We will see you then...
Posted by GrumbleJones at 5:48 PM