Our Saturday Game - ASL Scenario A23 Contest in the Clouds 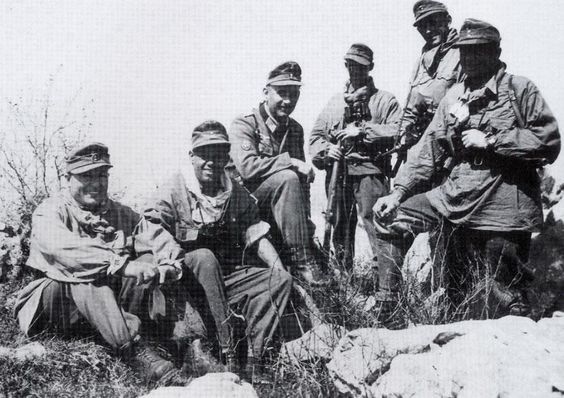 2020 is now in the history books and we move forward into the new year, both for our lives and of course for the new ASL year.  I ended 2020 with 92 total games and with 50 wins. It was an epic year of ASL. I don't expect 2021 to be as prolific. And honestly, I'm ok with not repeating 92 games in a single year. It was a lot of ASL. To kick off the new year, Dan and I selected an oldie in ASL Scenario A23 Contest in the Clouds. This was a scenario that Dan had wanted to play for quite some time and I'll be honest...it wasn't on my bucket list at all. This is one of those scenarios that combines weather and difficult terrain to make for a more complex game. Ground snow, climbing and terrain changes to the printed artwork can make for a bit more play difficulty than I generally enjoy. That said, this game would go to very nearly the final turn, before it was decided. I would also say that this is a scenario that takes more than one playing to fully grasp its tactical nuances...at least I would need more than one playing. 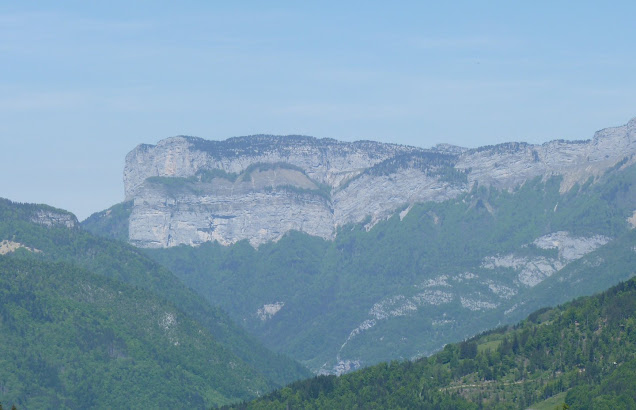 Contest in the clouds is set in March of 1944 as the Germans and Vichy Milice attempted to surround and eliminate the French Maquis who had taken refuge on top of the Plateau Glieres. Following a bombardment, the Germans sent up their Mountain Troops. The Germans successfully scaled the cliffs and hit from multiple sides, the Maquis eventually gave up the uneven fight and retreated from the plateau. 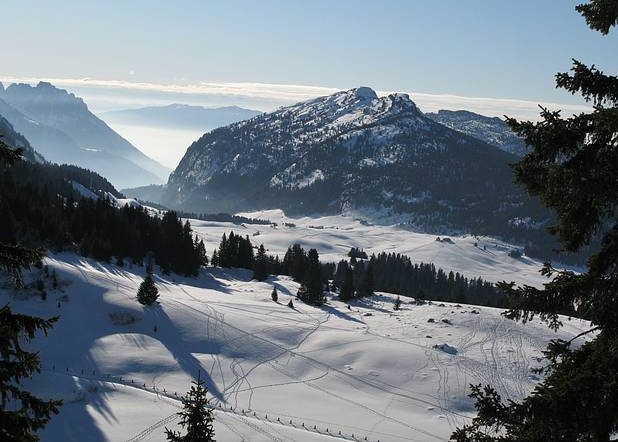 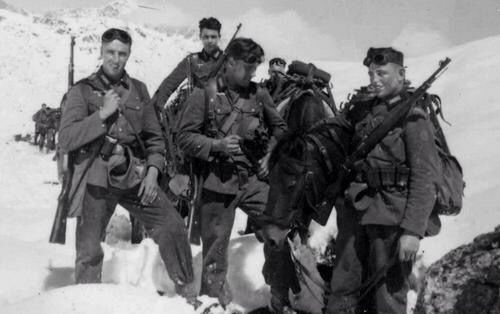 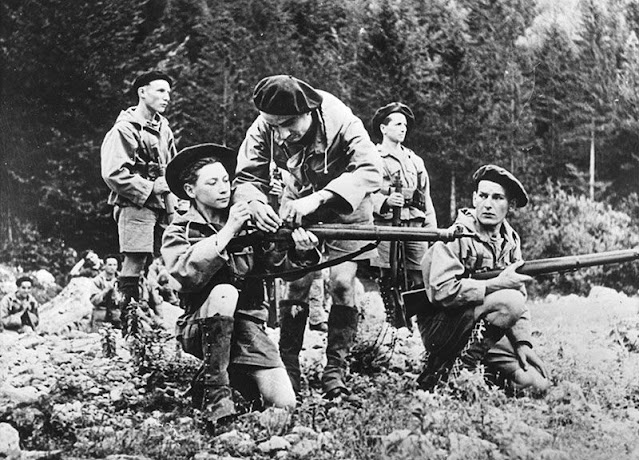 As the defending Maguis, I would command elements of Theodore Morel's Maquis Battalion. This force would consist of 7 x 5-2-7's, and 9 x 3-3-7's led by a 9-1, 8-1, 8-0 and 7-0 with an MMG, 4 x LMG's, 24 factors of mines and 10 trenches. This force would be handicapped by poor range, Low Ammo, which would cost me two of my LMG's during the game and of course an inability to form fire groups. The harsh terrain and a 5 SAN would be my best assets in this game. Another plus would be the fact that my entire force was Fanatic. 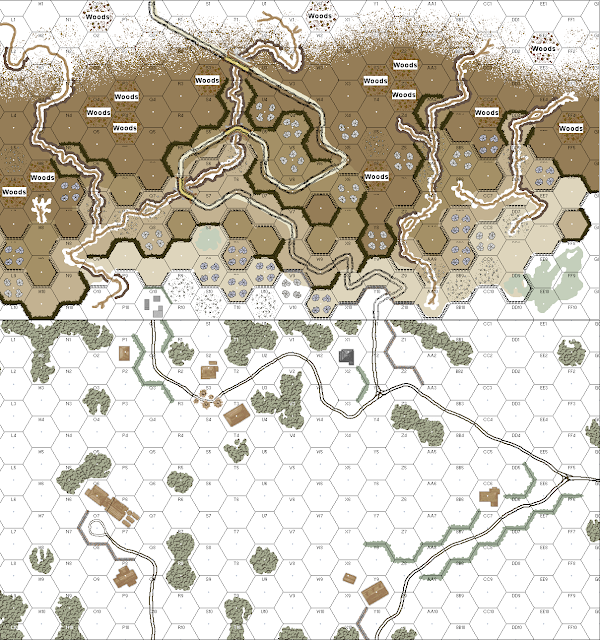 A look at the battle space. While the Maquis are pretty under-gunned, the Germans face a daunting task of getting up on top of the plateau. Dan would finally achieve it on turn 7...with only one movement phase left. So, German player be aware that 8 turns goes back fast and trying to move in this snow covered terrain is not so easy.

And now for Dan's Pre-Game Comments:
"The Germans must do some climbing in this scenario as the mines are sure to block the gully or roads.  My plan is to send units up each approach, the road (track), the two gullies while the 9-2 with three squads, HMG and MMG over watch from 4R1.  The 8-1 will also have three squads the MMG and LMG to suppress fire from 4AA1.  In fact the first turn or two may have a lot of prep fire to suppress any Partisans covering the road.  Hopefully the Partisans are in positions the 9-2 can see." 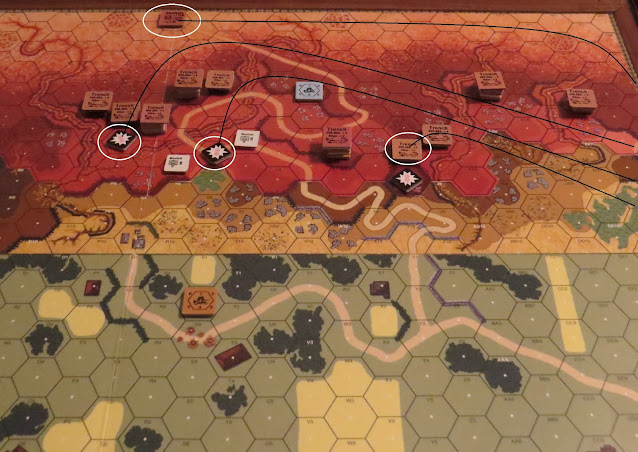 The pre-bombardment would generally miss my all but one of my entrenched positions. That hit would break the boys inside. Additionally, I would lose two of my minefields. Overall, the bombardment did not impact the game. 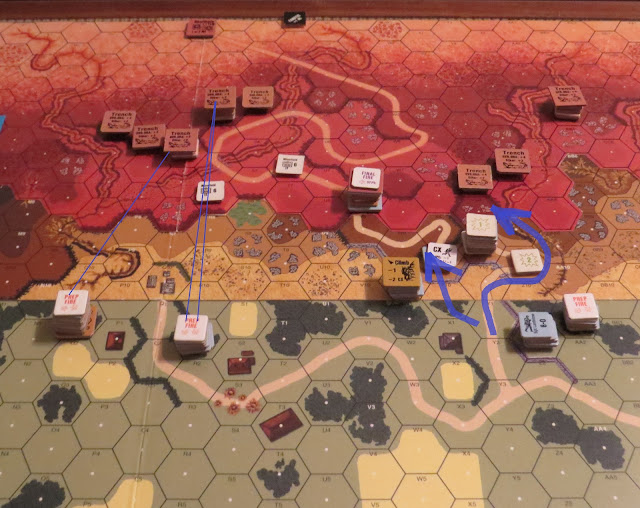 Dan's Prep Fire on Turn 1 would be decisive. His 9-2 would get rate of fire with both the HMG and MMG. He correctly selected my 9-1 Kill stack with my captured German MMG. When the rate of fire tear ended, my position was DM's and torn apart. My MMG would never fire a shot in the game. 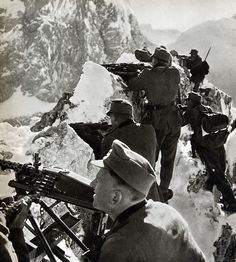 The German 9-2 would do an excellent job of putting down an effective base of fire. Dan could use big kill stacks with little worry as the long range kept me from firing back at them. 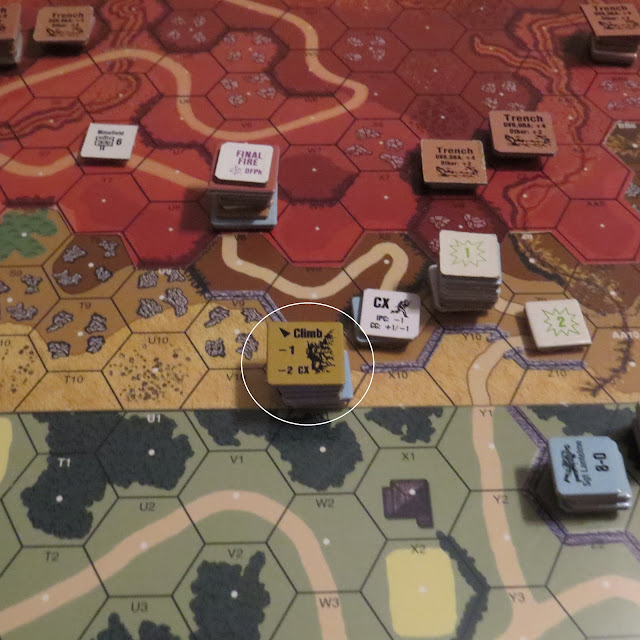 Despite, my weak range and anemic fire power, I still managed to break German units moving along the road. Dan would send his first group of climbers up a cliff. And the first German loss would occur as a 4-6-8 rolled boxcars... 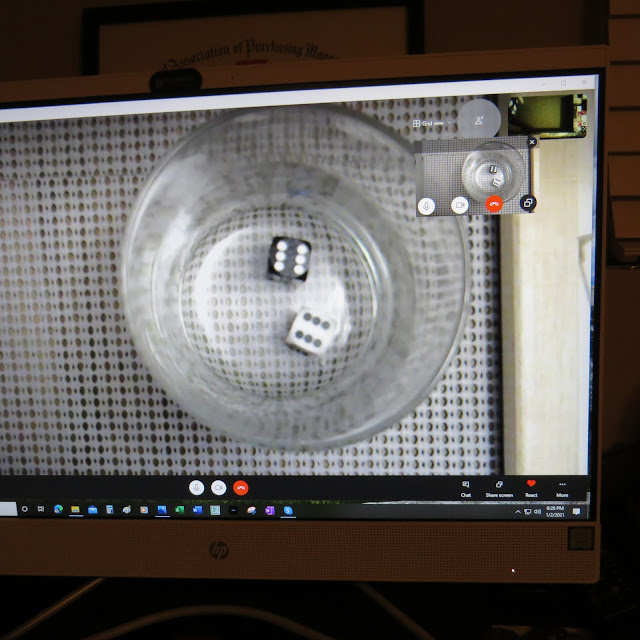 This is not what you want to see when you are climbing... 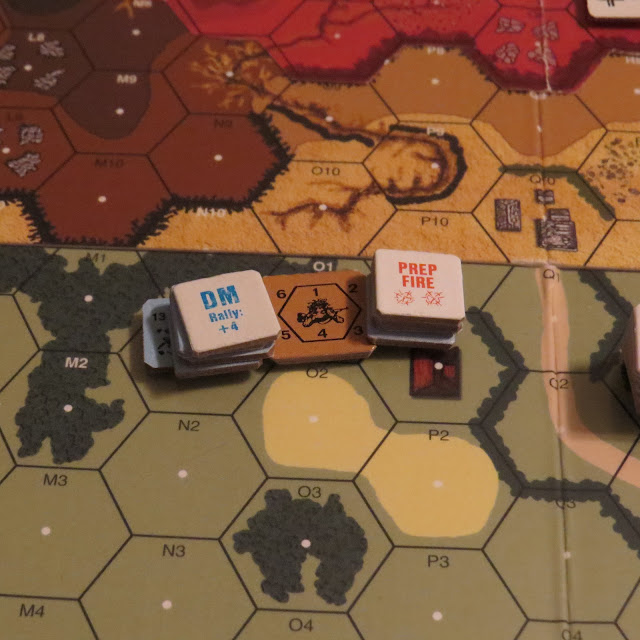 My SAN was a five and Dan would roll a lot of 5's during the game. 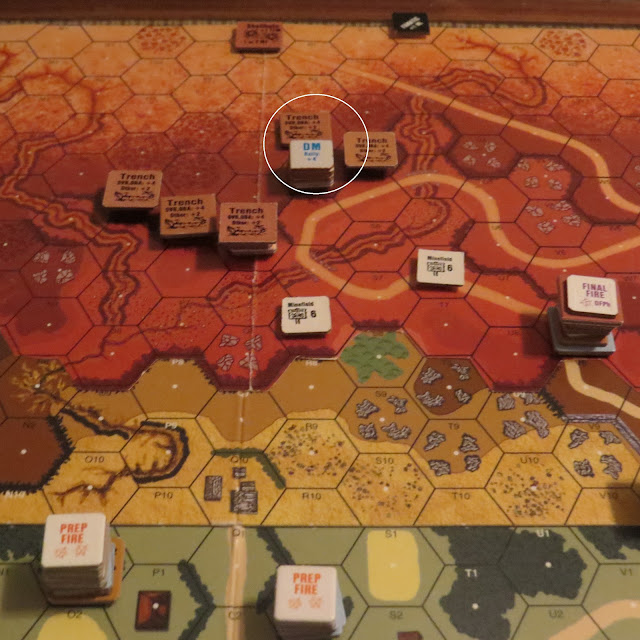 My 9-1 kill stack was knocked out of the game early. 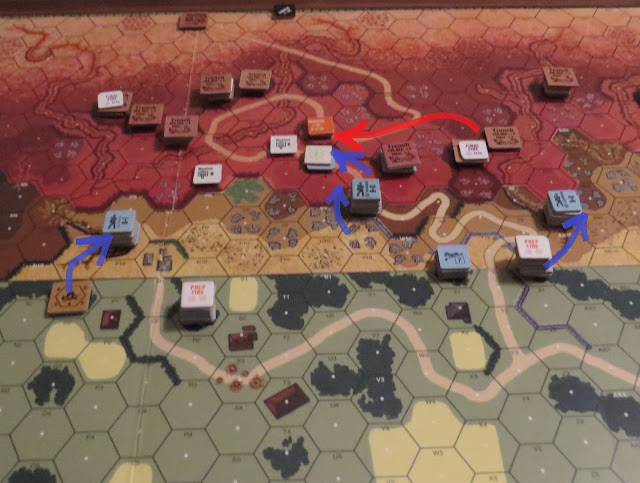 Dan's boys would spend a lot of the game trying to overcome the brutal terrain. 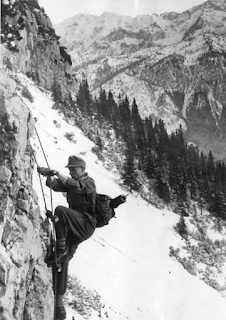 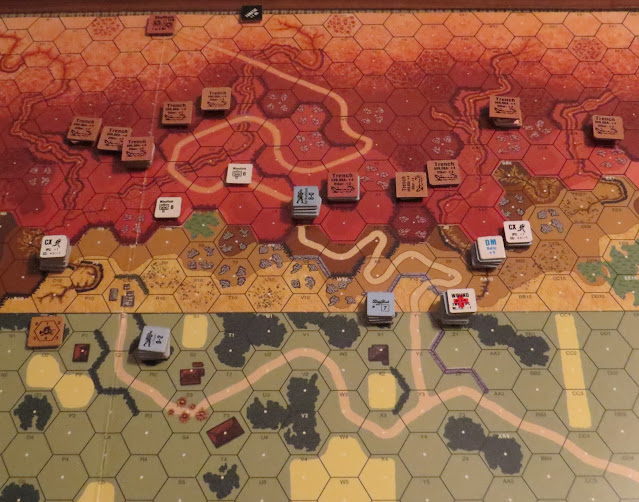 Progress was slow, but Dan had 8 movement phases to get to level 4. 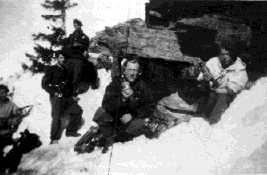 My Maquis would put down some limited fire, but not enough to disrupt the German moves. 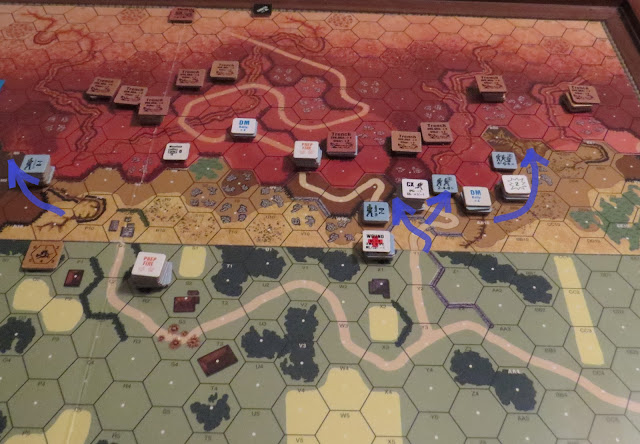 The Germans would discover the first of my two remaining minefields as a German hero would be blown away by one. This minefield would force Dan to climb in the middle as there was no other way around the minefield. 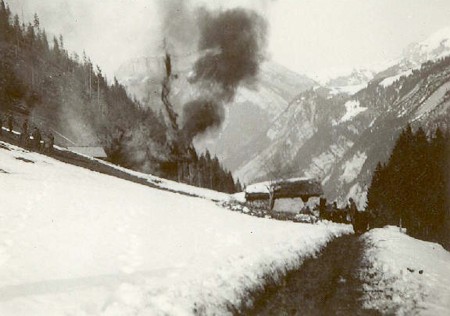 Well...at least the Hero revealed the mine field. 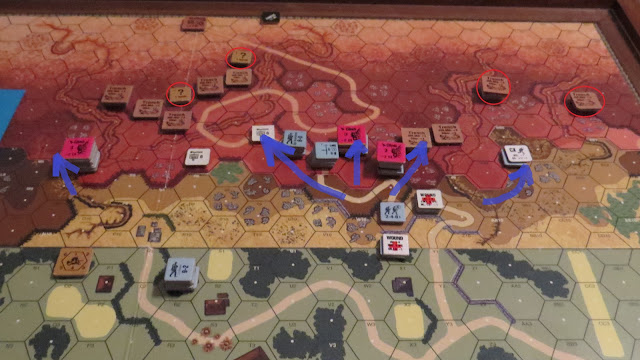 And a climbing went the Germans... 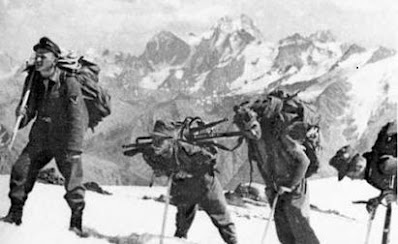 Dan would lose a 2-4-8 as they rolled boxcars and fell to their deaths. 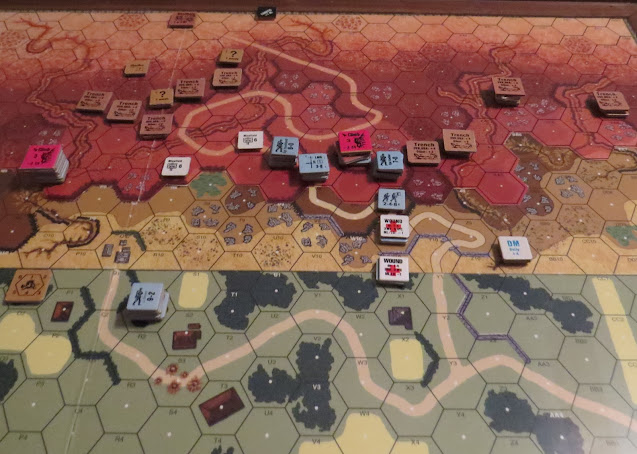 I didn't take a great many pictures for tonight's AAR. I wasn't quite into the game as much as I would have liked. There wasn't a lot of action...aside from falling climbers. The German firepower was overwhelming at times, so the game felt over long before it actually was over. 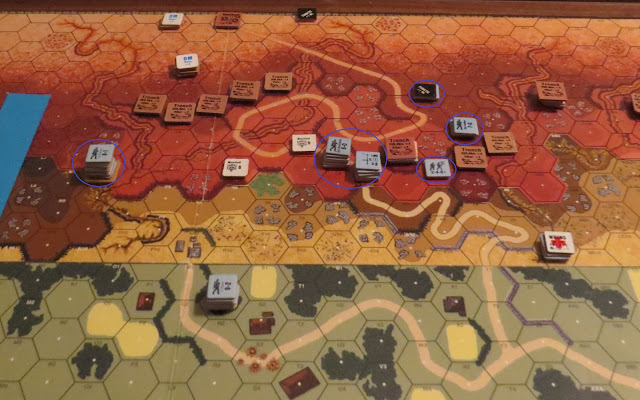 My last picture of the game. I fell back out of sight of the Germans where possible and managed to retain 4-6 good order squads on level 4 up until the 7th Turn, when Dan finally got more squads on level 4. With that I gave the concession. Dan and I managed to play 7 of the 7-1/2 turns in just over 5 hours. We continue to maintain a nice pace of play, despite the tough terrain, which does slow down play. The pre-bombardment also took a good bit of time to resolve as well.
My congrats to Dan on a good win and great start to the new year! My opinion of the scenario...well...it's just not what I enjoy playing. It's a fine scenario, but I really failed to grasp the proper way to play this as the Maquis, which requires a bit more  hiding and better minefield placement. ROAR has this with 5 German and 9 Maquis wins...so clearly, I did a less than stellar job. But again, my heart wasn't in this scenario as much as I would have liked for it to be.

And now for Dan's Post Game Comments:
"The plan worked.  The 9-2 got several hits on the Partisan 9-1 and 8-1 leaders and steadily broke the Partisan defenders, which was needed since the Climbing Germans rolled badly and lost one and half squads to falling.  By turn 8 there were 10 German squads on level 4 with one 7 Partisan squads (three of which were broke).  The Partisans need to do a reverse slope defense as there is not enough cover for a up front defense.  Also the Partisans lack the long range firepower.  My thanks to Grumble Jones for giving this scenario a try.  It has been 30 years since it came out and it is nice to finally give it a play.  Thanks for a great game." 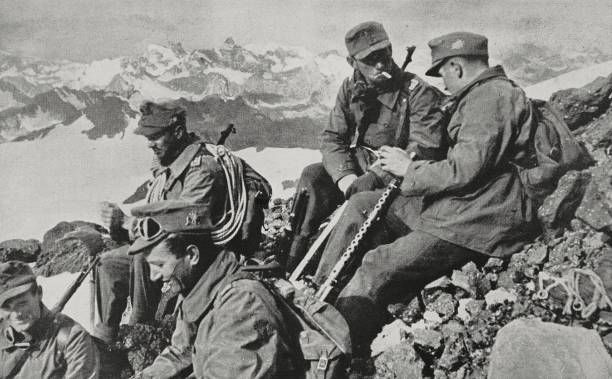 Dan and I will see you again next Saturday!!!
GrumbleJones at 1:59 PM
Share