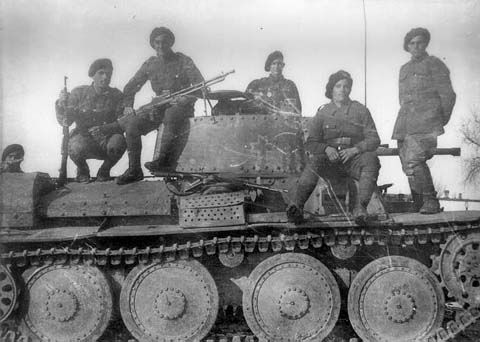 Well my friends...a lot has happened since last Saturday. A lot. Grumble Jones is not a place for politics, so nothing much needs to be said. My heart breaks for my country and I pray that people will come to their senses and put aside hate and the prejudices that it breeds.
As for ASL, well I managed to get in two games this week. Dave Mareske and I played a Friday morning game of ASL Scenario Rocket's Red Glare. I got my backside spanked hard. As the Americans I couldn't even break a single SS squad. Dave's dice gaveth and my dice tooketh. After only three turns, I had to concede. My third loss in a row. 2021 has not started out all that great on the ASL front.
Dan Best is now working his way through the Armies of Oblivion Scenario....and I am right there to  help him do it! The selected scenario would be ASL Scenario 113 Liberating Bessarabia. This scenario covers the successful effort of the Romanians to drive out Soviet forces from Bessarabia. Designed by Paul Kenny, ROAR his this scenario with 70 Romanian and 57 Russian wins. The ASL Archive has it with 22 Romanian and 4 Russian. Yeah...this doesn't look like a good one for the Russian Player...oh and that would be me. Sometimes...the first roll for sides is the single most important roll of the game. As I set up my defense, I mentally chalked this game up as my fourth loss in a row. Sometimes you just know. 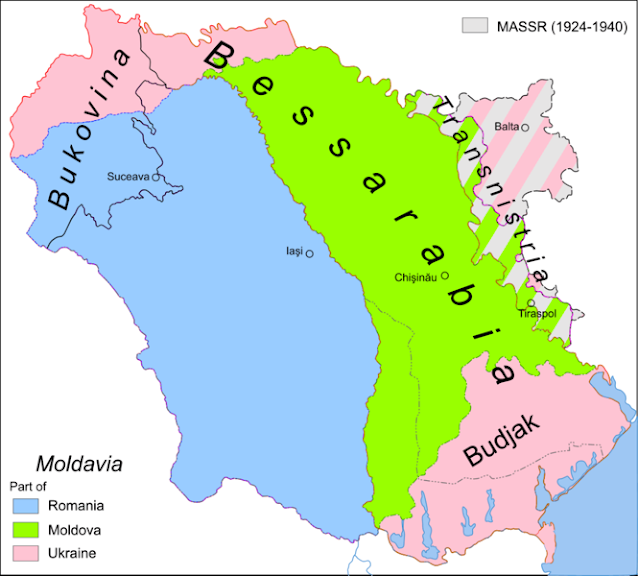 Just in case you were unsure of where Bessarabia was located. Balta should jump out at all veteran ASL Players!!! 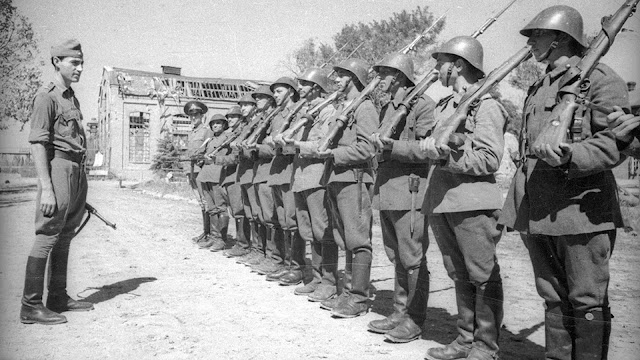 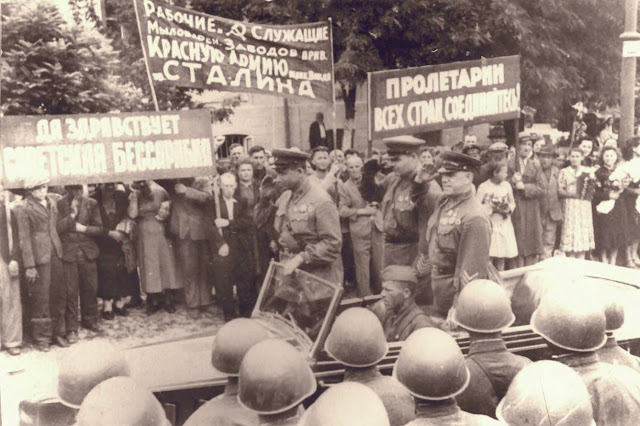 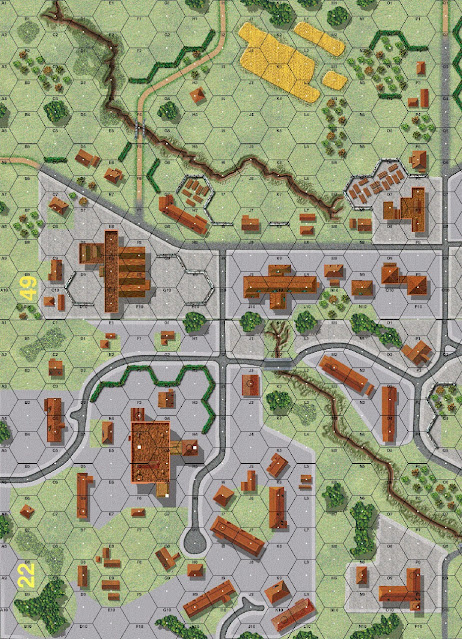 A look at the battle space. The Romanian Player wins at Game end by controlling 6 of the 15 available multi-hex buildings.

And now for Dan's Pre-Game Comments:
"The Romanians must capture six multi-hex building out of 15 on the board.  The Romanians will attack heavy on the right to capture the bigger building on board 49 and break into the rear areas of board 22.  The four 37mm armed tanks will attack in the center and right to try to defeat the Soviet armor piecemeal.  With 8-1 AL on the far right flank.  The 9-1 will have three squads and the two MMG and armored assault up the center road.  The 8-0with three squads and two LMG will armored assault on the right along with the 7-0 three squads a LMG and the MTR.  The will be four HS in the center with a tank that will take up a hull down position behind the wall.  Finally the two MG tanks and three squads will attack on the left keep pressure on and take the multi-hex building outside the Soviet set up area.  Hopefully the Romanians can defeat the Soviet tanks and use the surviving tanks to break the low ELR Soviets. " 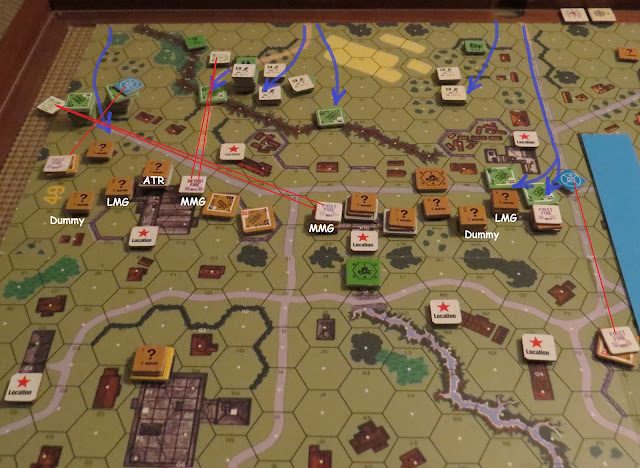 I placed my MMG's with the opportunity to place the all important fire lanes. I was fortunate that Dan's main attack hit me where I had the two MMG's focused. My armor would be unsuccessful in achieving hits against Dan's moving armor. 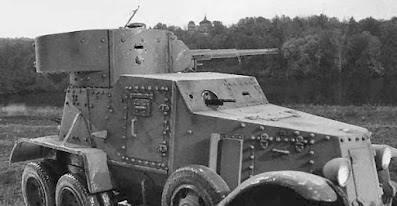 While not well armored, the BA-6 has a good gun and if it could hit...could do some damage. 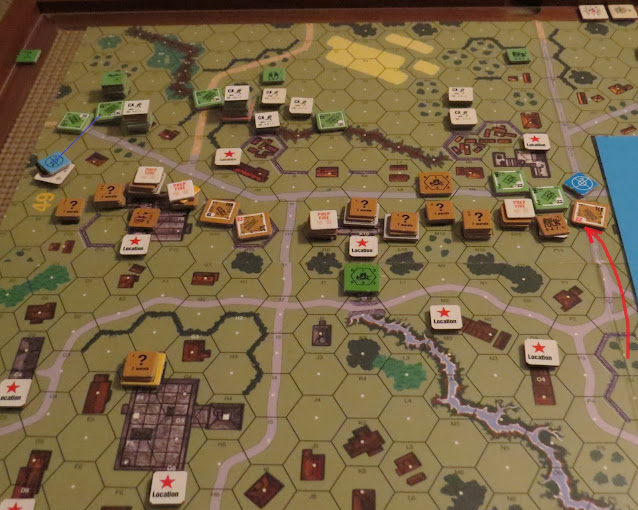 Dan would knock out my BA-6 on the left in Advancing Fire. You generally don't expect to lose your tanks to Advancing Fire Shots...but it happens. 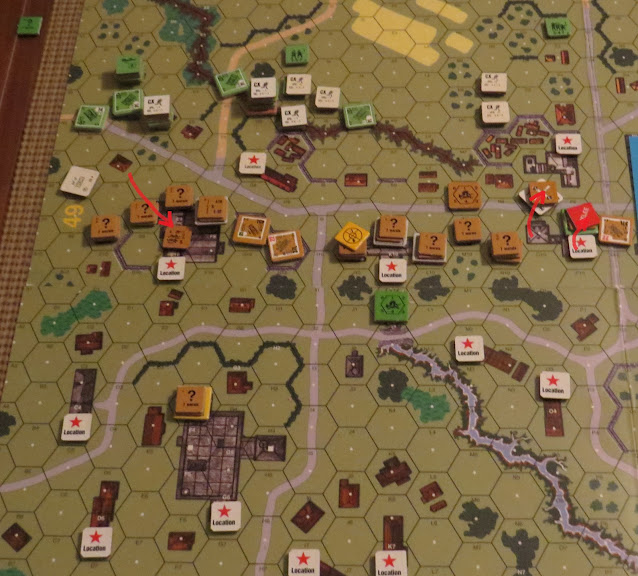 On the right, Dan's two CMG tanks became the focus of my revenge. I got stuck in Melee with one, but managed to take out the other in CC. At the end of the first turn, I was feeling ok. I had broken squads on the left and had slowed Dan's armor attack on the right. But Dan's Romanians were just getting started. 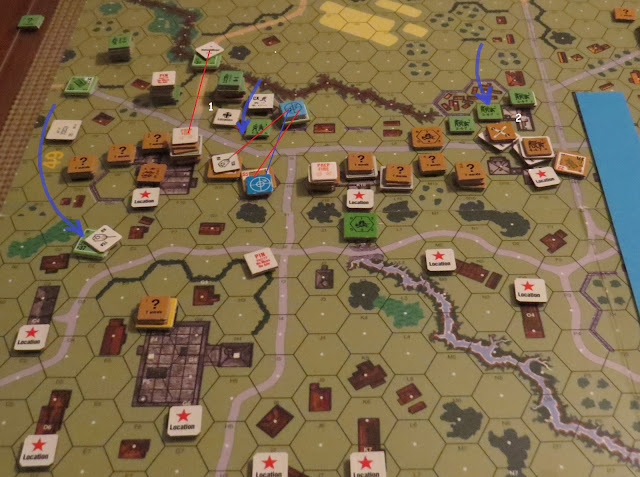 Turn 2 - I would destroy the other Romanian CMG tanks when it tried to start. But Dan still had three squads moving forward. On the left side, Dan's armor was causing me pain and his kill stacks were coming at me. My 7-0 on level 1 would immobilize a tank on the bridge with the ATR. 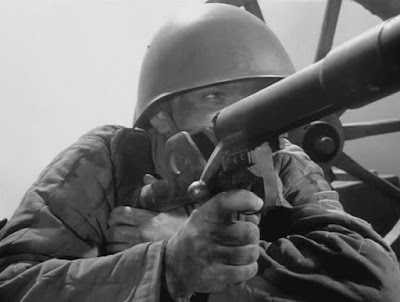 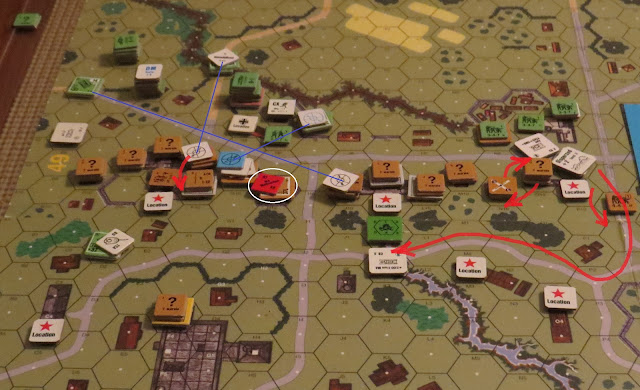 Dan's tanks on the left kept the pressure on both of my MMG positions and gave him time to rally his brokies and get the attack back on track. I tried too hard to hit a hull down tank and took the risk of intensive firing. Roy Connelly look away...I don't want you to see this. Yep...I broke the 45L on my second BA-6. Meanwhile, my BT-2A on the right rolled successfully again to move, but then stalled with an 11 on the mechanical start up roll. This would cost me 11 MP and force me to stop on the center bridge. Dan lined me up...fired and knocked me out...as I like to say...LUCK favors the Lucky!!!! And that wasn't me...in case that wasn't already clear. 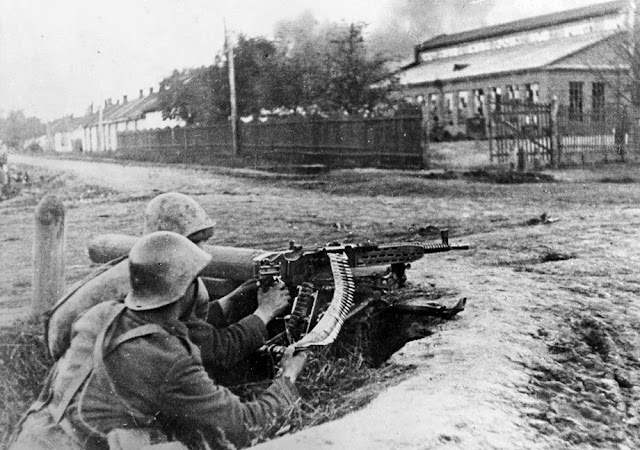 Dan's Romanians were finally getting the momentum. Dan would MALF both MMG's with a boxcars...but he would successfully repair both guns. 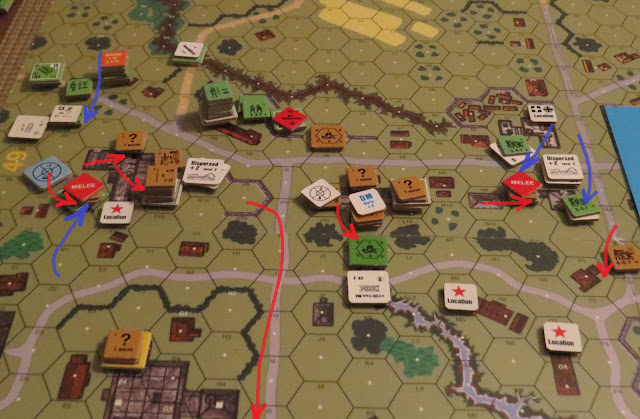 My recalled BA-6 would exit the game. Dan would destroy my last BT-2 and then MALF his gun with his intensive fire shot. Dan and I will never learn... And on the left, I was crumbling under the pressure. I would lose the Melee and a retreating squad would ultimately be mission killed. Both of my MMG positions had been broken, so the way across the street was wide open. 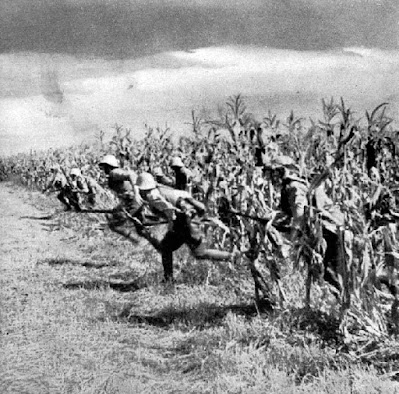 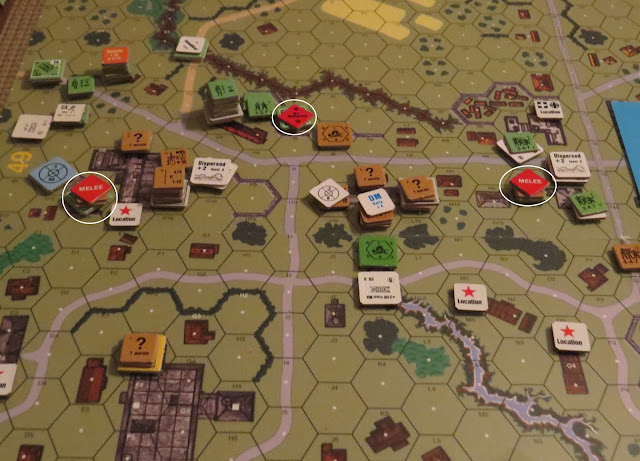 I attempted to destroy a Romanian tank in CC on the left, but would fail. I would lose the Melee on the right and Dan would have the one MALF'd MA on his center tank. Dan had two buildings at this stage of the game, but 3 and 4 were ready to fall. 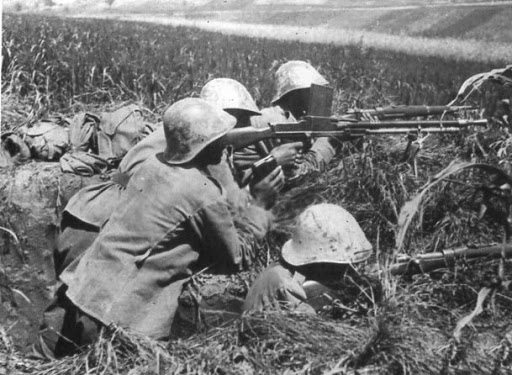 The Romanians had largely rallied and were attacking in strength on the left. 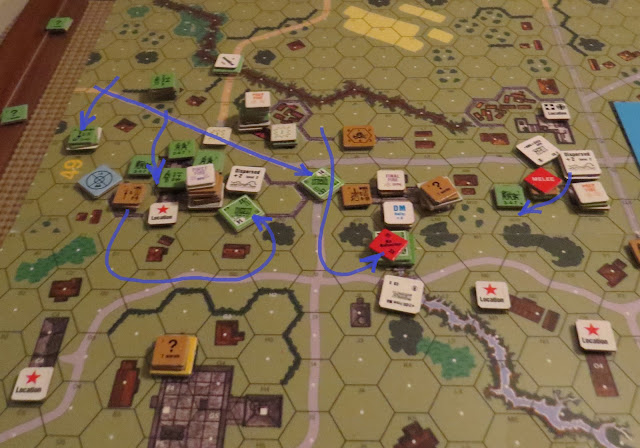 Dan's tanks went on the move to assist the infantry. 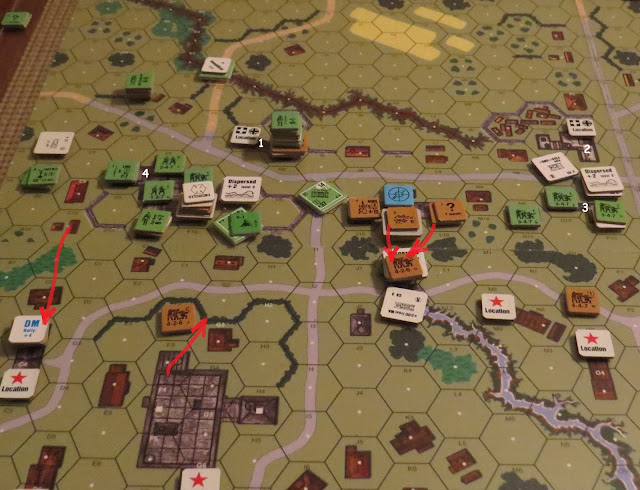 I would succeed in knocking out another tank in Close Comat, but Dan now had 4 buildings and #5 and 6 were in his sights. My infantry were melting. 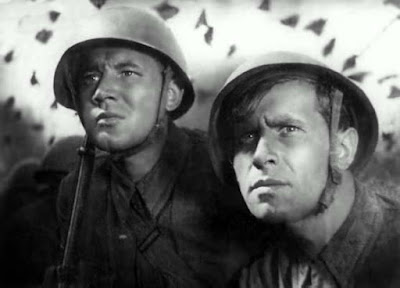 My boys knew the end was near. 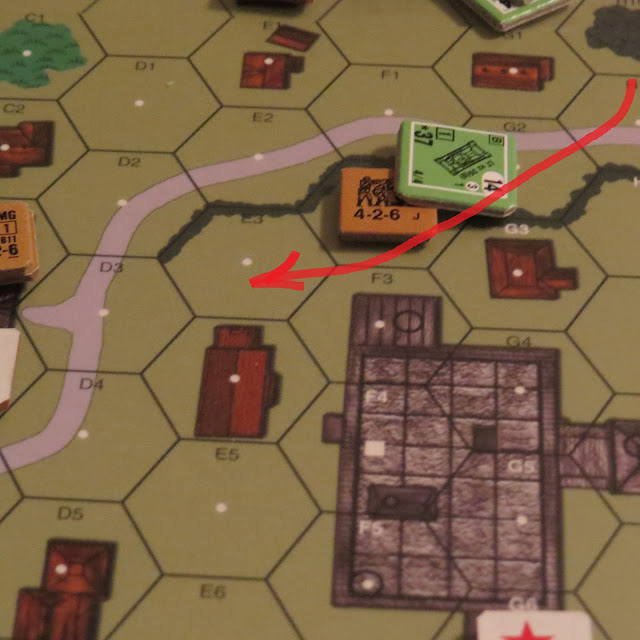 My 4-2-6 that had been held in reserve moved forward and Dan went for an overrun against them. They would only be pinned...whew that was close!!! 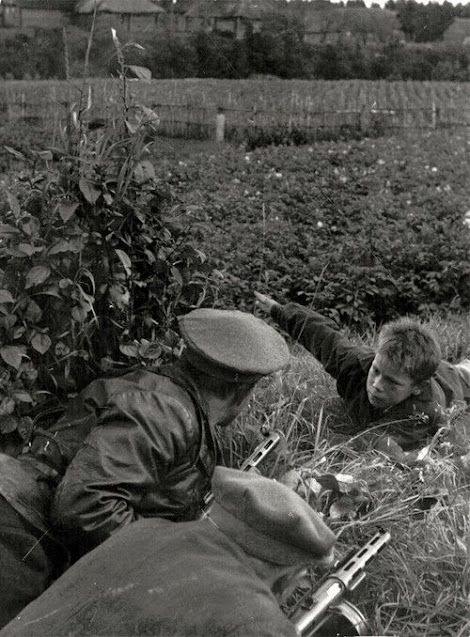 "Stay down Comrades!!! The Romanians control the village!!" 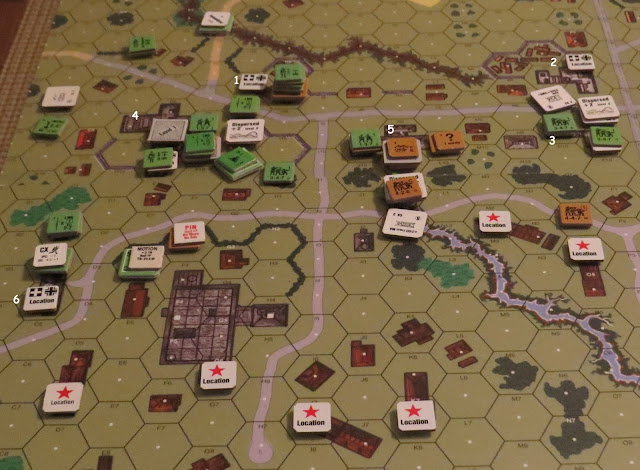 As Dan collected his first building in my backfield, I knew the game was over. I had 4 unbroken squads left and no leaders. It was the end of Turn 5, and Dan would have three more turns to just collect buildings. So I gave the concession and congratulated Dan on his win. It was really not in doubt around Turn 3, but anything can happen. My sniper would hit his 9-1 kill stack on break a squad. But it could just as easily have KIA'd his 9-1 and broken the stack. So you just never know! 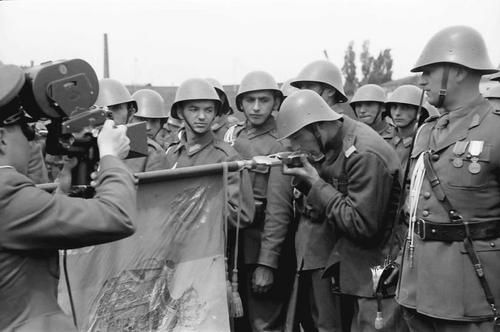 Dan's boys had liberated Bessarabia. This would be my fourth loss in a row. It's always tough to lose consecutive games. It affects your confidence going into the next game. Dice rolls always make a difference. I suffered from an inability to get resulting die rolls in both my Friday and Saturday games. It was really just hit or miss if anything would happen. Dan would roll 7 snake eyes and 1 Boxcars. I would roll 4 Snake Eyes and 3 Boxcars.

And now for Dan's Post Game Comments:
"The plan worked.  The Soviets were able to kill two tanks in CC and kill another by direct fire.  Another was immobilized by the ATR.  But The Romanian 37mm guns knocked out both armored cars and a BT tank and the other was recalled with a broken MA.  The Soviet infantry were broken by fire and for the most part did not rally back.  By turn 5 the Soviets were bottled up in the central building and the Romanian infantry were moving into the rear areas.  This scenario is hard on the Soviets and they need to get early breaks on the Romanian infantry who will not rally fast.  Plus get some kills on the Romanian tanks.  That is a tall order.  My thanks to Grumble Jones for another great game of combined arms ASL!" 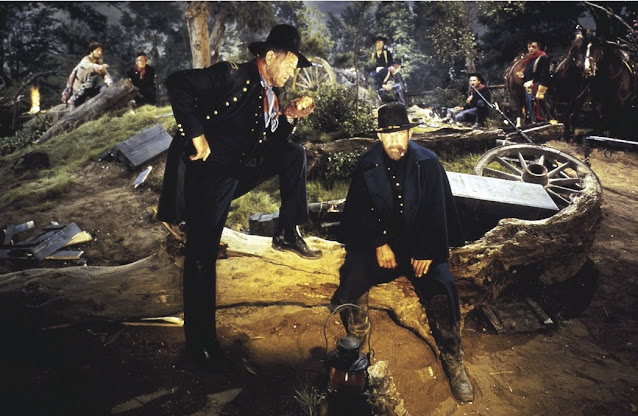 That's a wrap on Liberating Bessarabia. This was one of those scenarios that can be fun to play, but the Russian Player has to really bring his A game and even then, that may not be enough. I always hesitate to steer players away from a scenario, but I have to say, if you have two choices and this is one of them...well...pick the other one.
Dan and I will return next Saturday
for a playing of BoF11 Second Thoughts...
As always...we will see you then!
Posted by GrumbleJones at 3:45 PM