Where the Half-Squads Dare Backstory

In 1968, the movie, Where Eagles Dare hit theaters for the first time. Years later, it would be a frequent ABC Sunday Night Movie much to the joy of my 10 year old self. I absolutely loved this movie...but I never understood what the heck was going on in the grand hall. Yeah, it required my adult self to finally get what the actual British plan was and yet it was pure genius. In 1978, I began playing SL and then in 1989 ASL. In 1991, my game group in St. Louis would play a huge DYO scenario that involved Cable Cars at one end of the map. This was a massive 5 player game and I had command of British Commandos that were assaulting the German hilltop positions. At one point, I boarded a cable car and went up towards the Germans. My opponent naturally rolled snakes on his defensive fire attempt and my cable car and Commandos plummeted in pieces to the valley floor. So my first experience with cable cars was less than pleasant. 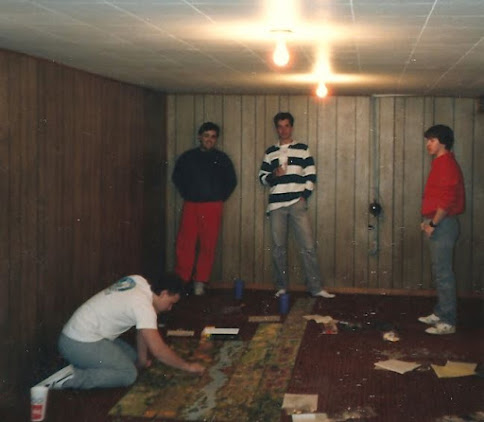 I have shared this picture before, but this is a picture taken during that DYO massive game. Our St. Louis group would get together only a couple more times before we went on with  our adult lives. ASL was purely a beer and pretzels game for this group. But as you can see...Basement ASL has always been my thing!!!

One of the hallmarks of Grumble Jones are wild and wacky scenarios. I come by my love for such scenarios honestly. I've been putting them together for a long time. And yes, for years I imagined what it would be like to do a scenario based on Where Eagles Dare. But it was just so not ASL friendly. Recreating a scripted scenario with heroic actions is so hard to in ASL. The game does not lend itself well to scripted, narrative style games. Those little things called dice make it tough to ensure certain outcomes. Of course this wouldn't stop me from pursuing this dream.
So flash forward to March 2020...COVID-19 was just starting to roll through the country and self-isolation began. So there I was sitting a my desk and staring at the window. I needed something to do...and I thought...what will I do for Halloween this year?? I had pretty much exhausted Nazi Zombies (if that's possible...it might not be!) and I had done dinosaurs and Skin Walkers...so maybe BIGFOOT...yeah BIGFOOT (no I never considered that). And then it hit me...Where Eagles Dare...why the heck not...do it...make it happen I told myself. 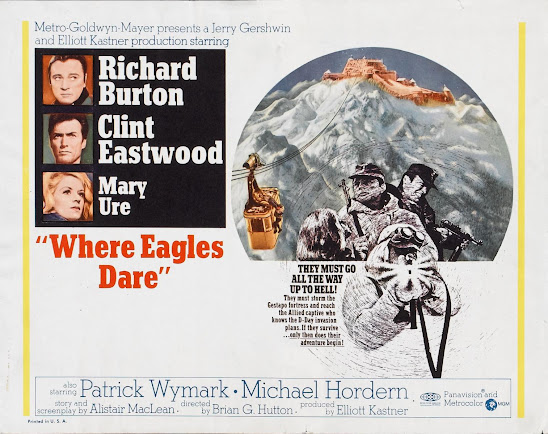 I reached out to Rick Reinesch and we collaborated on a map design (3 maps in total). Rick took my ideas and turned them into reality. His maps are really beautiful. So with the maps in hand, I set about putting together a scenario or set of scenarios. I reached out to Jeff and Dave at the 2 Half-Squads. They had graciously participated in the 2017 Halloween Scenario. So I asked if they would consent to being key players in the new scenario. They agreed and the story was born. So here now is the backstory for WHERE THE HALF-SQUADS DARE! 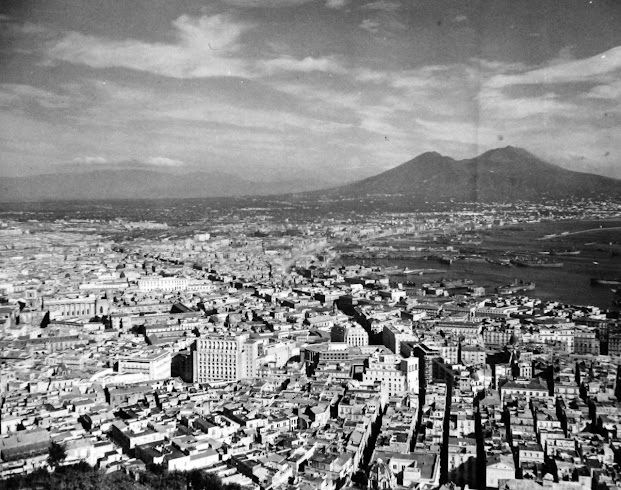 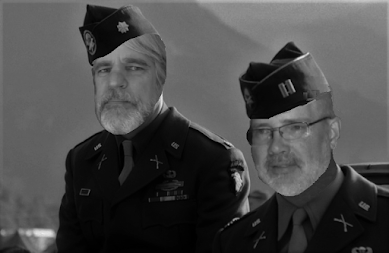 It is February 1944 in Naples, Italy...two US Army Communication Specialists, Major Hallet and Captain Kleinschmidt have been working closely with the new Podcast Battalion. This elite battalion was working on advanced communication techniques and something referred to in secret Army memos as the "Internet". Their work was highly classified and known to only a few hand-picked members of the US Army General Staff. Even 5th Army Commander, General Mark Clark had no idea of what their work entailed. The two officers were in Naples to begin work on Second Front planning. They would be tasked with creating and sending the operational Code Words which would inform the French Resistance that the Invasion of France had begun and to begin their sabotage missions against various German targets.

Captain Kleinschmidt spent his time in Naples testing the range of their new, classified transmitters referred to as Podcasters. Testing in Italy was designed to deceive the Germans into thinking the Podcast Battalion was working on a project related to the Italian Campaign. In reality, Cpt. Kleinschmidt was already communicating with his French Resistance Contacts in preparation for Operation Neptune. German Abwehr Agents misconstrued the name of the Operation...Neptune and concluded that Operation Neptune would be an Invasion of Greece. It would be the fruition of Churchill's strategy of invading Europe's soft underbelly. 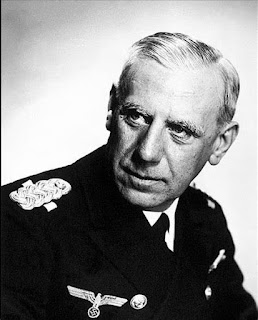 Admiral Canaris, head of the Abwehr was keenly interested in learning more about the Podcaster devices and the "Internet".  His agents in Spain had already informed Canaris that Operation Neptune was the operational code name for the Allied Second Front in Europe.
He therefore ordered Operation "Windig Stadt". An elite group of German Brandenburgers would enter Naples as Stars and Stripes reporters and capture Hallet and Kleinschmidt. He wanted them alive...
Canaris' plan was to bring Hallet and Kleinschmidt to Field Marshall Kesselring's headquarters in Italy. Kesselring was one of the few men that Canaris could trust to cooperate with the Abwehr and ask no questions. Canaris wanted to keep the operation a secret from Himmler's SD. 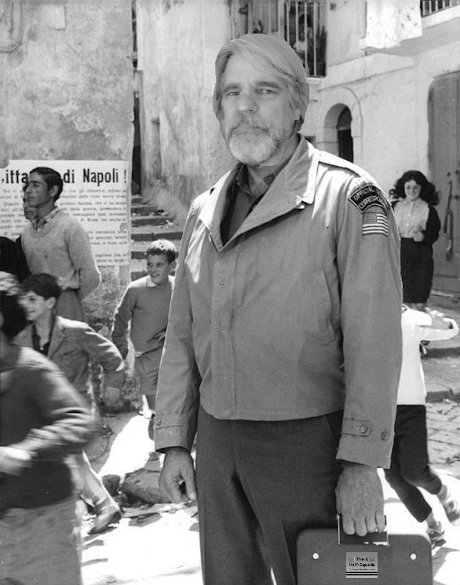 Unbeknownst to Canaris, a German double agent - SS Major Johan Schmidt better known as Major Smith of MI5 was attached to Admiral Kesselring's Staff and quickly learned of the German Operation Windig Stadt. Working with MI5 leadership the British created a double-blind operation. Major Hallet was briefed on the plan. He and Kleinschmidt were to allow themselves to be captured. Meanwhile, Smith acting as SS Major Johan Schmidt would ensure that Himmler's SD would learn of Canaris' plan and take Hallet and Kleinschmidt into SS custody. MI5 knew that the SS would then take Hallet and Kleinschmidt to the SS Communications center in the Schloss Hohenwerfer in the German Alps.

Schloss Hohenwerfer was home to one of the strongest Transmitters in Europe. It's central location both protected it from Allied forces and allowed the Germans to communicate with their forces throughout Northern and Southern Europe. 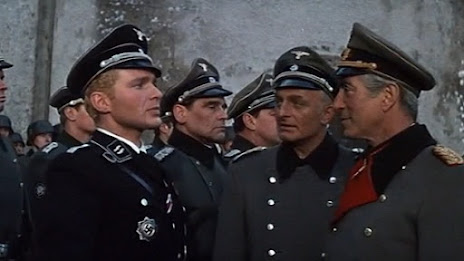 SS Colonel Kramer was Kommandant of Schloss Hohenwerfer. Wehrmacht General Rosemeyer was in command of the German Mountain Troop training center located in the nearby village of Werfen. Rosemeyer's men provided the primary troop garrison for protecting this key German facility.

MI5 was aware that some of its agents were compromised. So during the mission planning, Major Smith made sure to include the three known agents on the mission. He knew that they believed him to be a German agent as well. Christiansen, Berkeley and Thomas were the German agents to be included. An American Ranger, Lt. Schaeffer was included in the mission to ensure someone that Major Smith could count on.
So Strike-Team Broadsword was activated. The plan was simple, fly into Germany and drop into the Alps as German Mountain Troops...gain access to Schloss Hohenwerfer...eliminate the MI5 double agents, free Hallet and Kleinschmidt and then broadcast the secret codes from the German transmitter in Schloss Hohenwerfer, which would ensure that it reached all corners of Europe and would be completely undetected by the Germans...as it originated from their own equipment. Once this was completed, Major Smith and the surviving members of his team were to escape to the nearby airfield where a JU-52 would take them to safety. Saving either or both Hallet and Kleinschmidt was essential as well. 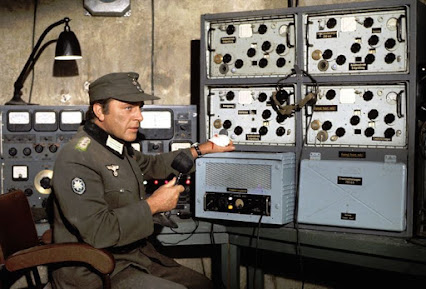 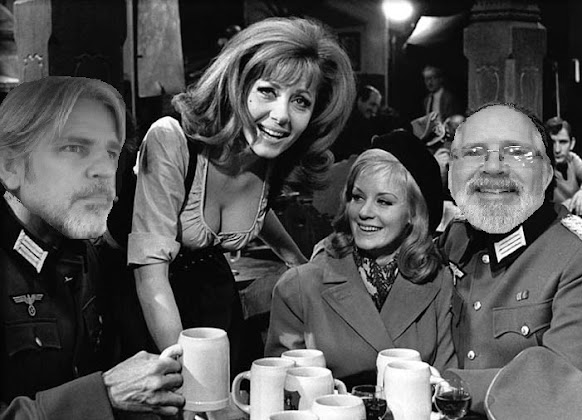 So there you have the backstory for Where the Half-Squads Dare. In this Halloween special you will have the chance to play out key moments from the classic WW2 movie. There will be four scenarios in the pack as well as SSR's to help it along. You will start the game inside the Schloss Hohenwerfer. Rick's awesome map of the castle interior will allow you to play out the scene in the Great Hall as well as take down the Armory and secure the Radio Room before escaping by Cable Car. The German Player will of course try to stop you.

And of course Major von Hapen, Heidi and Mary will also be along for the ride.

And with any luck...you'll actually have fun with this tongue in cheek ASL adaptation of
Where the Half-Squads Dare!
Available October 1st...
Posted by GrumbleJones at 12:13 AM