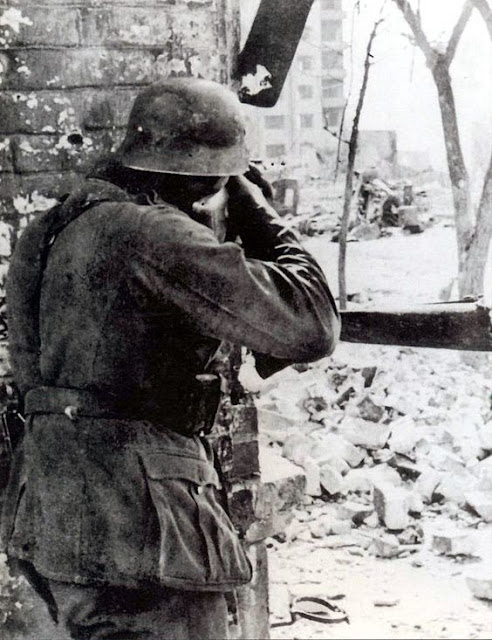 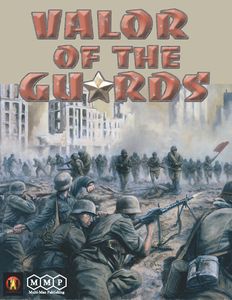 For our Saturday game- Dan Best and I ventured once more to the streets of Stalingrad. Our choice for the evening would be HASL Scenario VotG9 - Eviction Notice (designed by Tom Morin).  This would be our long awaited foray into the Valor of the Guards. Neither of us had played any of the VotG scenarios. So suffice to say we were both looking forward to getting one under our belts. With so many scenarios and so many products out there, it can be difficult to get the play value out of some our purchases. As an example, I have owned Red Barricades since 1992 and have only played one of it scenarios. Naturally, some of that is related to the size of the map and to the depth of the scenarios and of course the CG itself. Time is at a premium in our adult world, and the luxury to spend hours, days, possibly weeks on a CG can be hard to find. 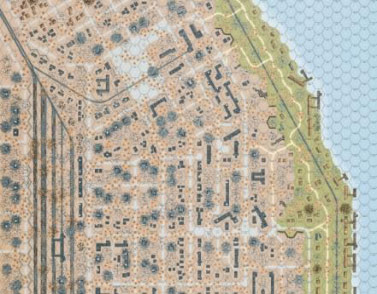 VotG9 - Eviction Notice only uses a small portion of the map and the scenario objective is focused on the Russians pushing the Germans out of the area near the Water Works or seizing a building south of the German perimeter and ensuring that there are no good order German MMC's in the perimeter. With only 4-1/2 turns available, the Russians have to move quickly and decisively. 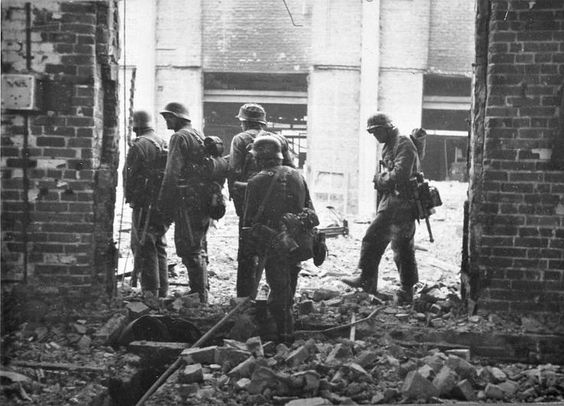 After rolling for sides, Dan Best would be the Germans and therefore the scenario defender.  He would command elements of the 518 Infantry Regiment of the 295th Division. The 295th would participate with the rest of the 6th Army during the drive to Stalingrad and there it would eventually be destroyed. It would be reformed in 1943 and finish the war on garrison duty in Norway.

The division would have an interesting side story. During Barbarossa, the German Einsatgruppen were busy committing genocide in the sector of the 295th. In particular, the children of  Byelaya Tserkov had been locked in a local building following the murders of their mothers and fathers. While awaiting their fate, a Catholic member of the 295th became aware of their plight and complained to the divisional Chaplain of the 295th. The complaint made its way all the way up to General Reichenau, who dismissed the complaint. The 90 Children of Byelaya Tserkov were massacred shortly thereafter. No record of this atrocity might have existed had it not been for a soldier of the 295th who had a conscience. Lest we forget. 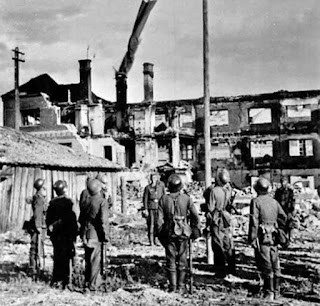 The men of the 295th hoist the flag over Stalingrad. Their glory would be fleeting.

Dan's force would be fairly powerful given the terrain and time-frame for the scenario. 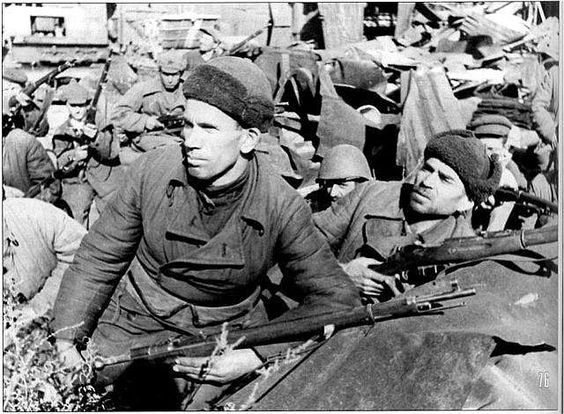 As the scenario attacker, I would command the men of the 3rd Battalion, 42nd Guards Regiment of the 13th Guards Rifle Division. This division began life as the 87th Rifle Division, but following Barbarossa and the Kharkhov battles of 1942 it received it new designation as the 13th Guards Rifle Division. They would arrive in Stalingrad after exhausting marches with no rifles or ammunition. And after a cursory briefing from Chuikov would find themselves thrown into the cauldron of fire. They would go on to win two Orders of the Red Banner and would fight till the end in Berlin. Truly, theirs would be the Valor of the Guards!

No MMG or better was in my force. Not sure if it would have been helpful or not, but I sure would have liked some heavy firepower to go up against Germans in +3 DRM locations. With no smoke, I would be faced with the prospect of just charging into the German fields of fire. 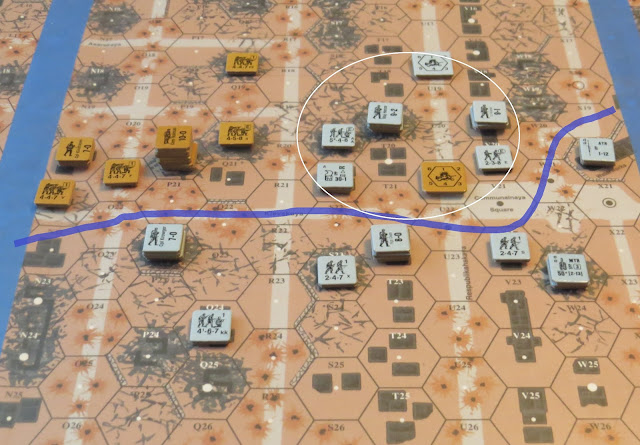 The German perimeter is in blue. To win the game, I would need to take one location south of this line and ensure that no more than 2 good order German MMC's were south of the line as well. Or...I could eliminate the Germans in the white circle and push them back into their perimeter.  My plan would be to eliminate the white circle group. But I wanted to secure the building in P22 to help interdict the street and keep Germans south of the perimeter line from reinforcing their comrades. 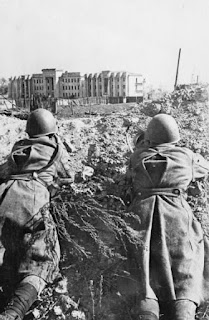 It was time to serve the eviction notice on Dan's Germans! 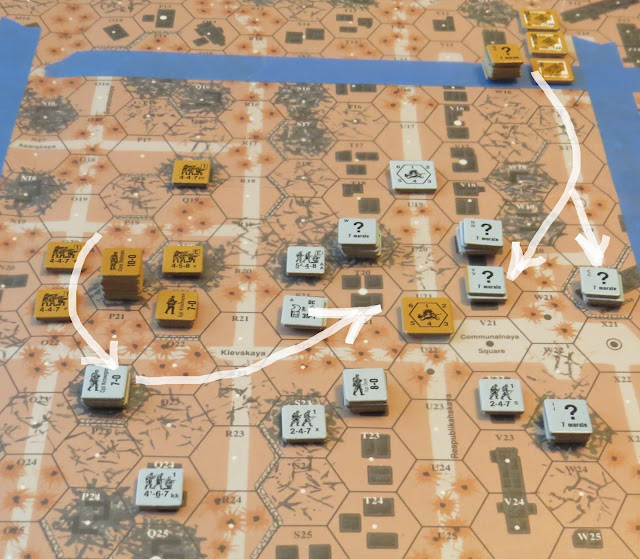 So my plan was to hit the Germans north of the Perimeter from two sides. My armor and 6-2-8's would come in from behind, while my Commissar directed forces took P22 and then moved towards the armor to catch Dan's forces in a vise. Sounded like a workable plan. My dice had other thoughts. 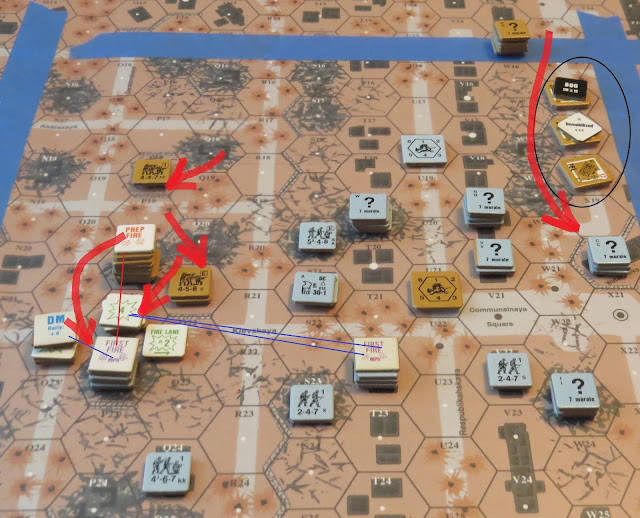 My first Prep fire with 18 factors would do absolutely nothing. So my boys would have to charge into the fire of the Germans in P22. The German MMG in T22 would join the fun. My attack would be stopped cold.  My armor assault was equally dismal. One T-60 would bog in the debris and the other would fail the ESB roll to stop and be immobilized. The only good thing was the sound of Dan's ATR rounds bouncing off my T-60's. 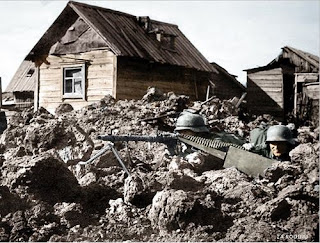 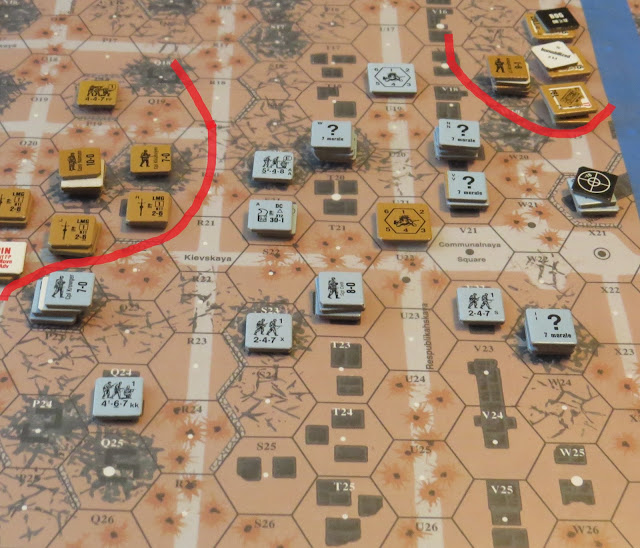 My vice was in place...but the Germans were in strong positions. 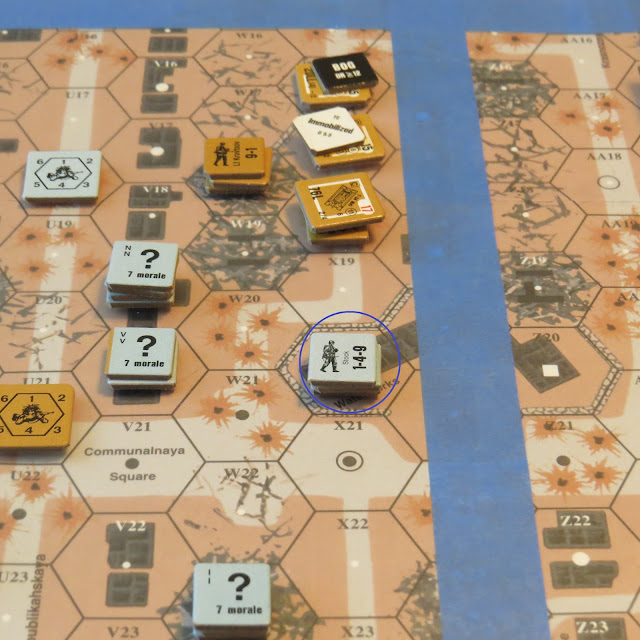 Dan's dice were especially kind to him during this scenario. His first roll of the game was a Snakes and he would continue to be blessed with a number of serpents throughout the game. He would create a Hero in X21 and this Hero would go on to hurt me bad later in the game. 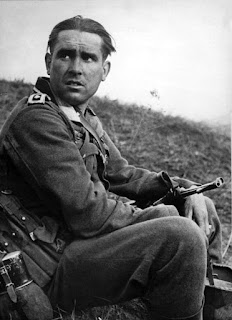 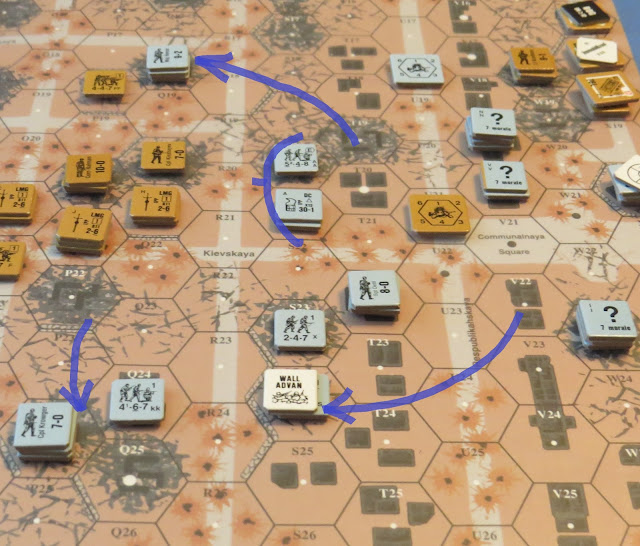 After my shaky start, Dan realigned his forces and moved his 9-2 aggressively to get behind my Commissar force. 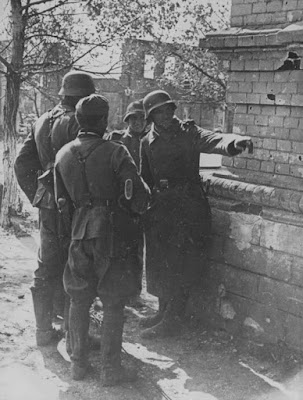 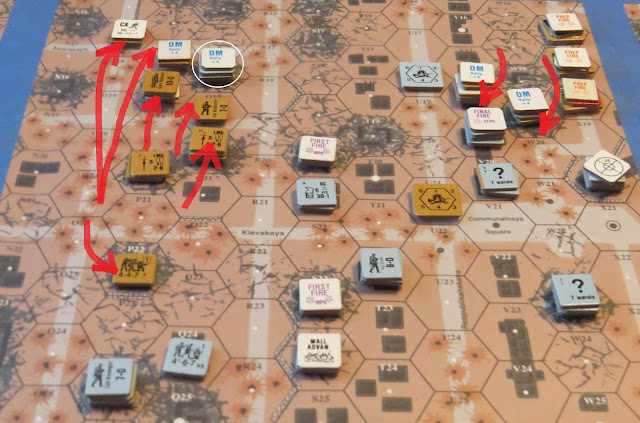 Despite having to react to Dan's 9-2 coming in from behind, I was able to advance and secure the P22 hex. And then Dan's dice would hurt him as his 9-2 broke. I had to keep him from routing away. I tried hard to get my boys in position, but I could not get it done. 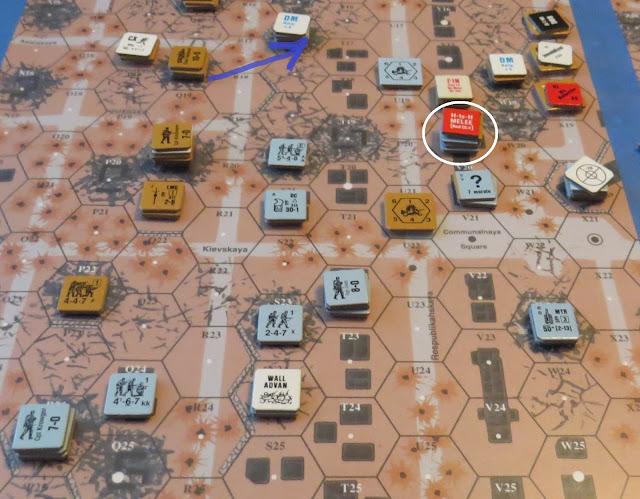 Dan's 9-2 would escape and rally the very next turn. My Armor force on the east side would continue to struggle. I would MALF the T-34 Main Armament and go on to break it permanently. The T-34 would be recalled. Just like that my tanks were done. Mission killed. My one and only success of the game would be the hand to hand combat against Dan's 9-1 and 4-6-7. I would get the ambush and eliminate them. 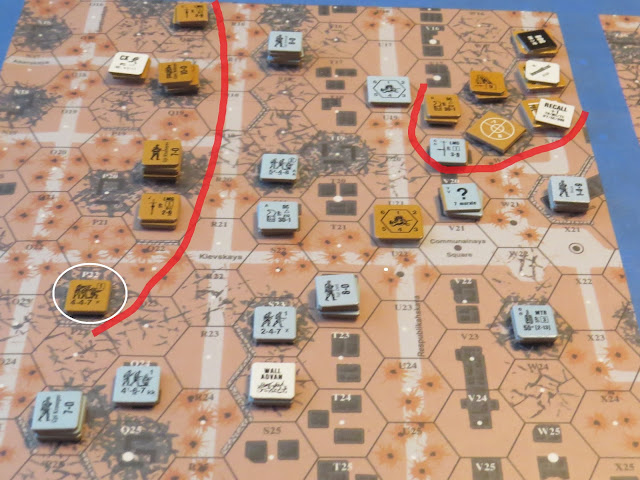 As we headed into the bottom of Turn 2 and top of Turn 3. I had achieved my initial goals, but still had too many broken squads to move my assault forward. 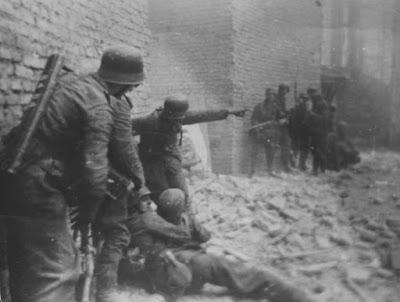 Dan's grenadiers were dictating the battle. 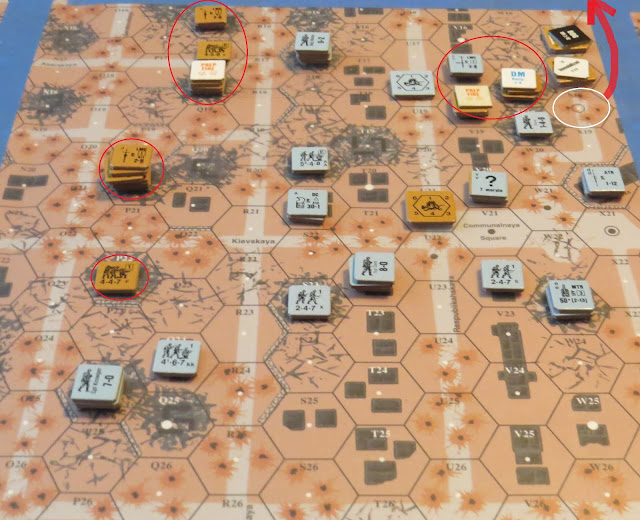 As my T-34 recalled itself off the map, I was hurting. My boys were broken on both wings and I was lacking the offensive punch I needed to "evict" Dan's Grenadiers from their low rent properties! 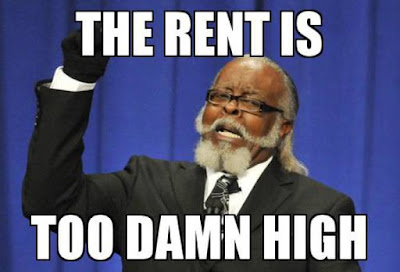 And so were my dice rolls... 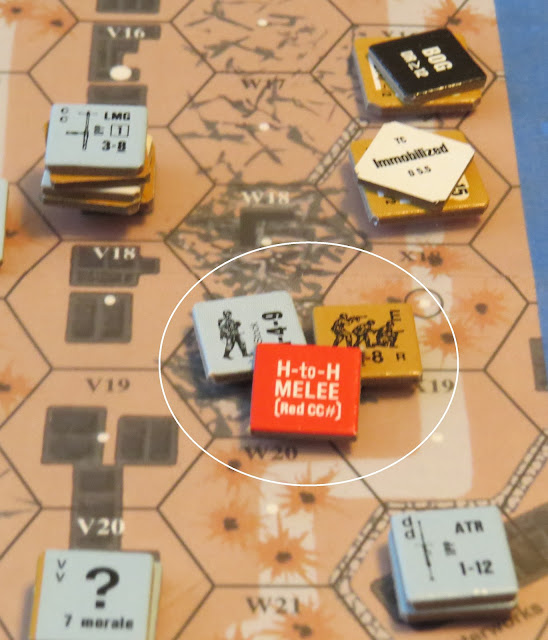 The next major action would be against Dan's intrepid Hero. He had moved forward through the rubble to ensure that my DM'd squads remained that way. I had to send a 6-2-8 into Hand to Hand with him. And yep...you guessed it...everybody died. Dan's Hero would take down a 6-2-8 by himself. 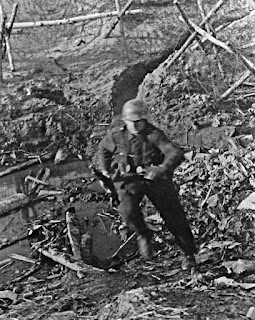 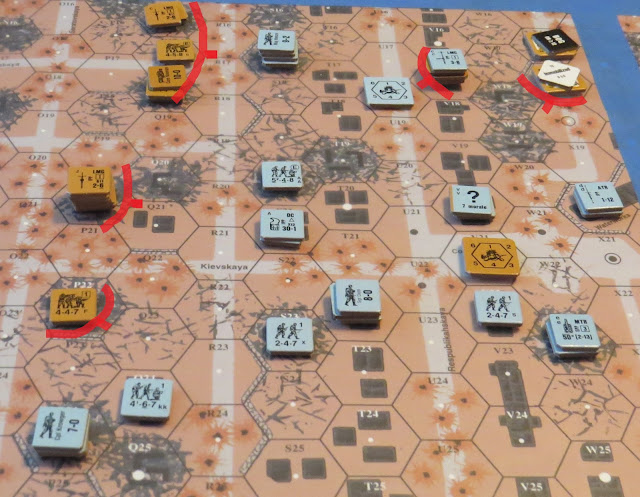 With the battle basically finished on the east flank, Dan's boys could focus on my force on the west side. 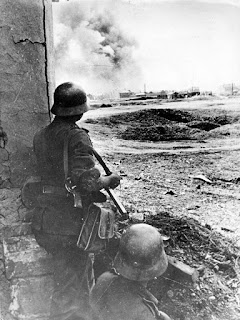 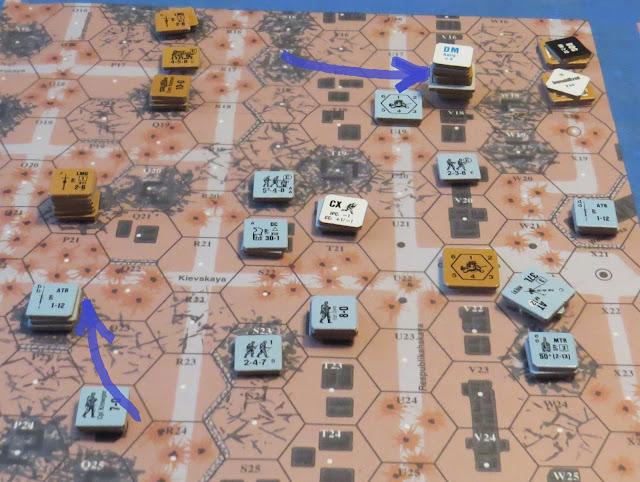 A final look at the game. Dan's 9-2 moved towards the east to ensure the demise of my broken boys on that flank. Meanwhile on the west side, Dan retook P22 and it would be my boys who received the eviction notice as I gave my concession at the top of Turn 4. 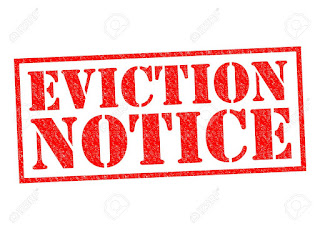 It had been a fast playing scenario and Dan and I were done in about 2-1/2 hours. So I highly recommend this one for those looking to experience Valor of the Guards.

I congratulated Dan on a solid victory. He was in control of the battle from start to finish.  So that's a wrap on our first scenario from Valor of the Guards. A little lighter fare for this AAR....but I think we all needed a breather after a month of amazing ASL games!  Kinda nice to finish an AAR in well under 6 hours! I was starting to get wore out from all of that great ASL! 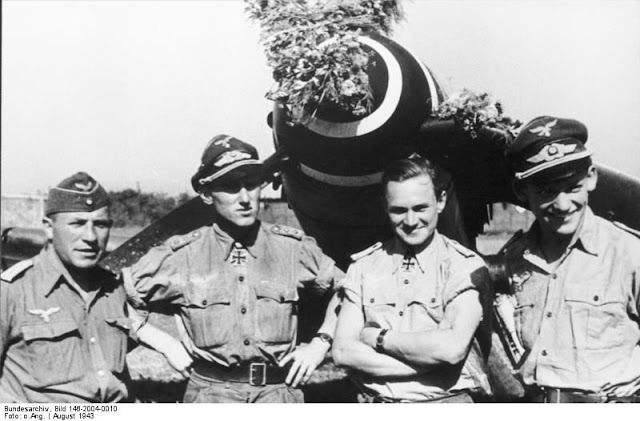 "Ghost Rider...you're cleared for a fly-by!"

Dan and I will be back next Saturday
with ASL Scenario AP8 A Bloody Harvest.