Well, I had been looking forward to this year's Texas Team Tournament all year. I arrived on Wednesday night and had a nice visit with some old ASL friends, Rick Reinesch, Doyle Motes, Ed Beekman, Kevin Kenneally, Roy Connelly and others.

The next morning I showed up early to start setting up the 4 player BFP-104 Flying Turrets scenario from BFP's, Crucible of Steel pack (which I did not own...yet). As I began getting out the counters...I realized I was missing some of the vehicles and all of the plane counters that were in the Crucible of Steel pack...drats I thought...but then as I gazed towards the front of the room...I saw a Crucible of Steel sitting on the "for sale" table...and it was calling me. Before I knew it I handed Rick Reinesch five Jacksons and started punching the needed counters. 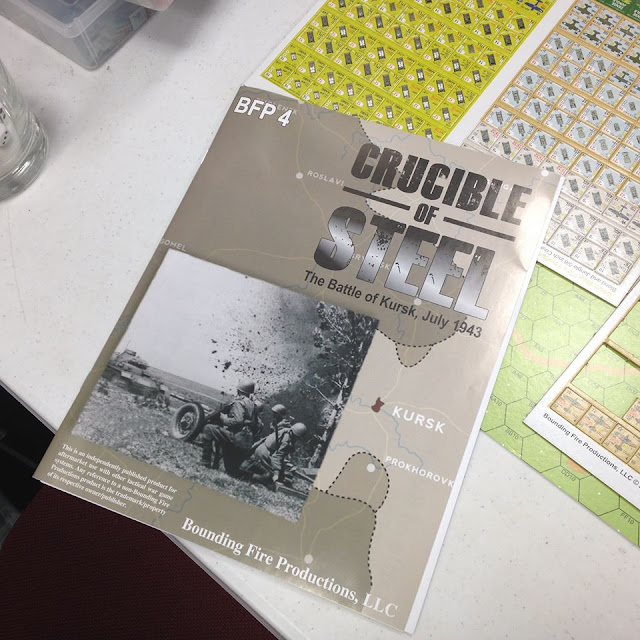 I had been wanting to get a copy of this, so was glad to finally do so!

Again, as I awaited my opponents and finished sorting counters, I was just struck by the size of the scenario. It immediately reminded me of the PanzerBlitz Situation #10 Scenario, which simulates much the same action at the Battle of Prochorovka.

My fellow gamers showed up shortly and helped me get the rest of the Soviet counters pulled...a daunting task when you have 65 tanks.

Allen King and Jim Ferrell joined me for this awesome scenario. Our fourth was unable to attend the tourney, so Allen and I decided to take the Russians against Jim's Germans. 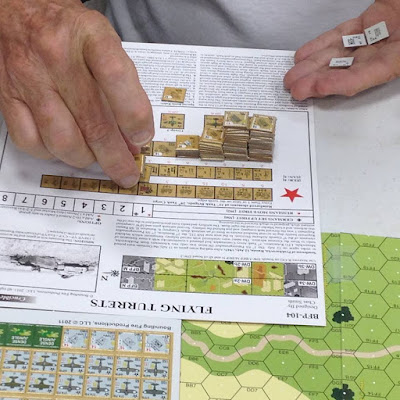 Allen starts dividing up the Russian Forces...which were huge. It's been a looong time since I played a scenario this large.

The German forces were pretty large as well with 5 Tiger 1's ready to enter on Turn 1.

Airpower on both sides consisted of 4 separate Groups.

The BFP counters are beautiful...especially the aircraft counters. 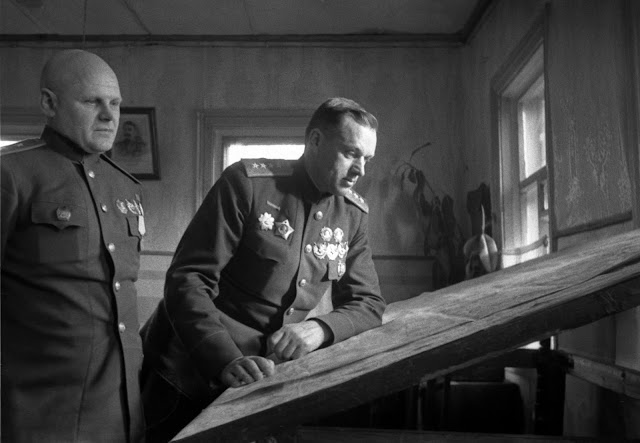 Allen and I conferred regarding placement of the three pre-game bombardment hexes. We selected two directly in our front and one on the hills in the German setup zone.

After we completed our plans, Jim got busy setting up the German defense. 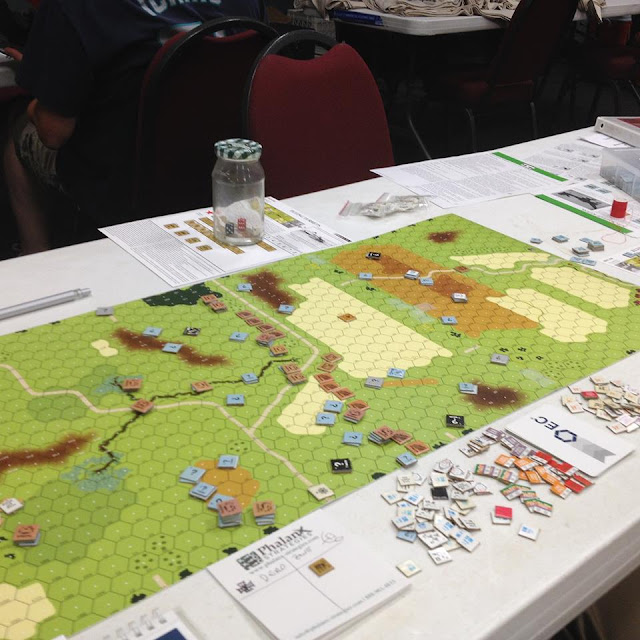 At Noon, he was finished and we ran off to get some lunch...a lunch that would have a huge impact on my tournament. 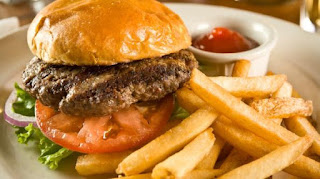 We came back from lunch and began playing this East Front behemoth!! 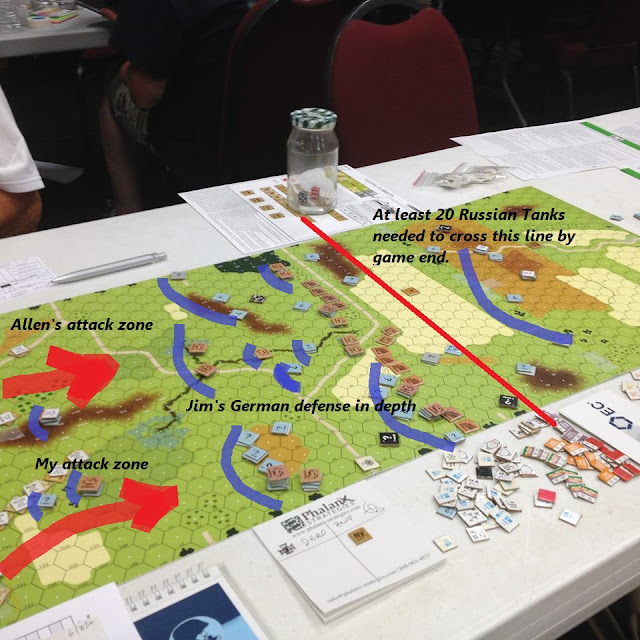 Allen and I decided on parallel thrusts towards the south. Our plan was to move forward as fast as possible with as many mounted troops as possible. Our T-70's would lead the charge and sacrifice for the greater good of Mother Russia!

Our artillery started the game with the pre-game bombardment.

Aside from creating a few shell holes, only a single German AA gun crew was DM'd by our largely ineffective bombardment.

With the bombardment completed, Allen and I began the arduous task of moving our MASSIVE attack force onto the board. In order to keep things fair for Jim as the single defender, Allen and I moved attack groups sequentially first in my zone and then in his zone. This was to give Jim a fair opportunity to defensive fire across both our attack zones. Turn 1 Movement phase took a loooong time to complete. 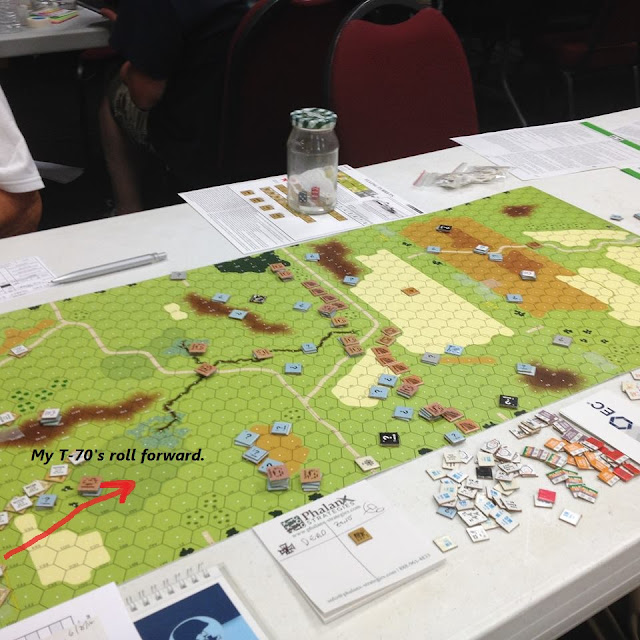 My T-70's rolled onto the map first and took some shots from German half-squads, who tried to pick off riders. Fortunately, my force moved up largely intact. 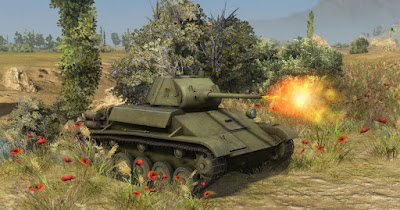 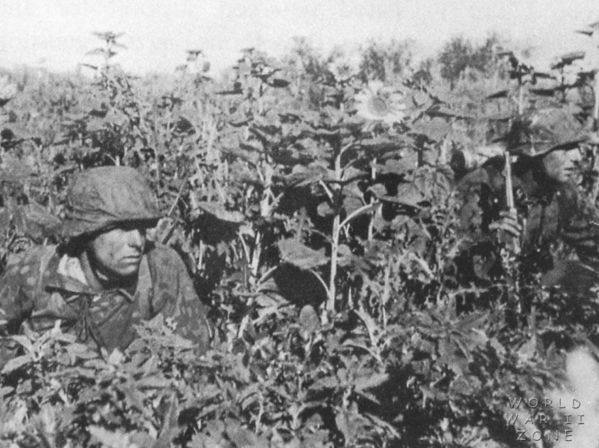 Jim's 3-3-8 half-squads along both the west and east edges of the map did a great job in putting down residual fire and causing the Soviets a bit of trouble as we moved in. Thank goodness they didn't have any panzerfausts. 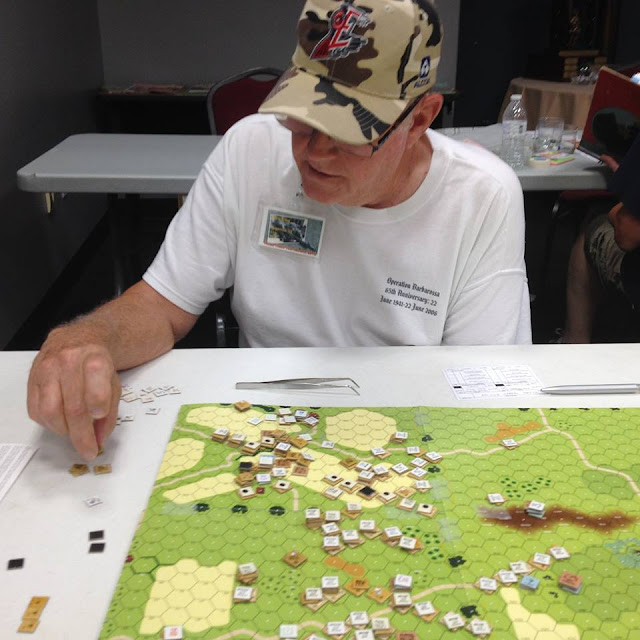 Allen's forces moved on in strength and had to deal with SS Grenadiers in the buildings that were in his attack zone. Allen's force also included our trucks which were transporting the Russian 120 mortars...one our of most important smoke making assets. These trucks were quickly taken under fire at long range by Jim's 8cm and 120cm Mortars. 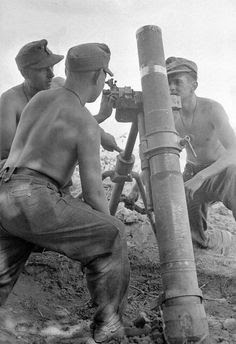 The German mortars would put down a lot of fire, but Jim did struggle early on to get ROF with them. 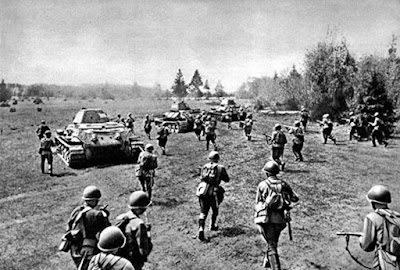 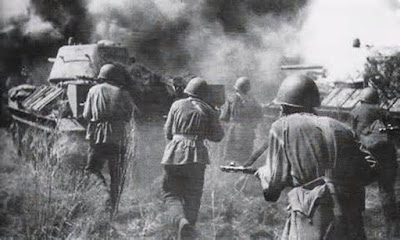 German fire did force some of our riders to dismount and successful mortar fire would KIA the Russian 9-2 who had two crews with both Russian HMG's. Both HMG's were lost when the crews broke and bailed. 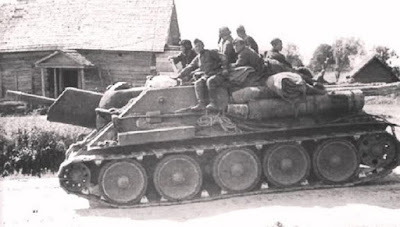 Our SU 122's came on next. These bad boys were another crucial smoke creating asset. 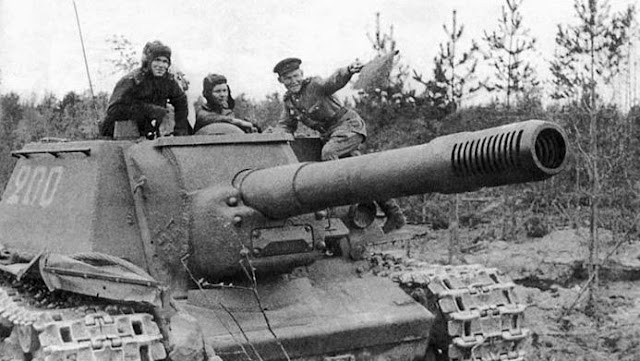 Last to rumble on in Turn 1 were our SU 152's. These were given the task of eliminating German infantry as the rest of our forces bypassed them. 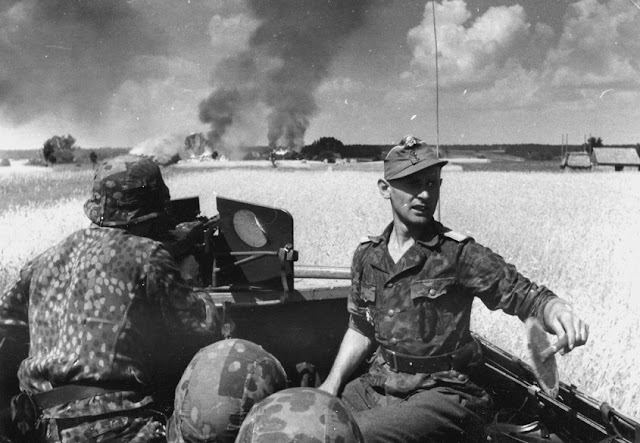 In the German phase of Turn 1, they turned on the pressure and the half-tracks with the 28LL's were surprisingly effective against our forces. 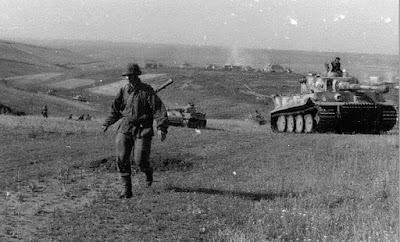 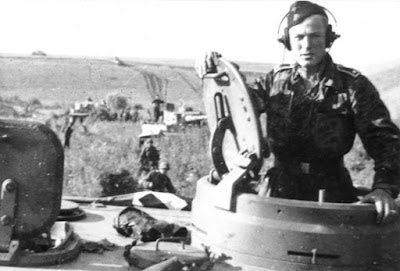 Turn 1 also saw the arrival of the German Tiger I's. Additionally the Germans successfully contacted Battery A and in Turn 2 Defensive Fire would drop some arty on our forward units. 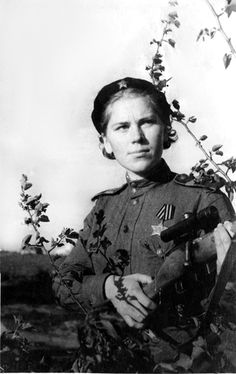 Of course no game is complete without the Sniper Chick and she would find German targets on two occasions with a key squad break and the KIA of an SS 8-0. 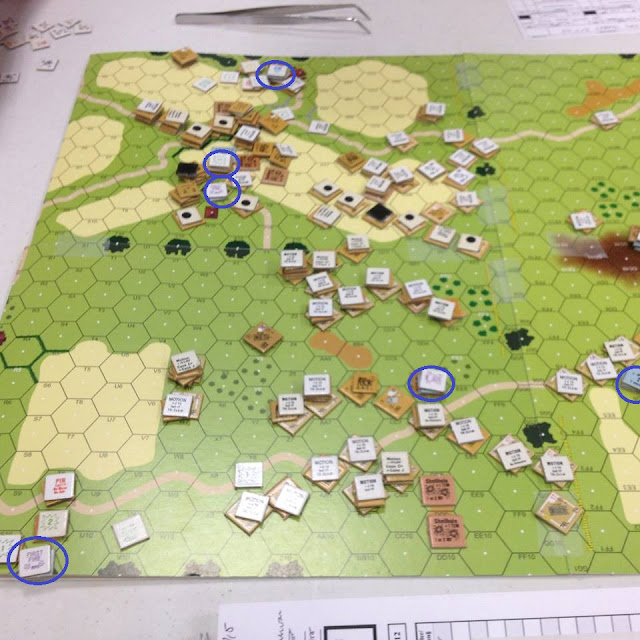 As the game reached Turn 2, the Germans were still resisting in the Soviet rear. This required attention as it was messing up our possible rout paths. So precious resources were diverted to overcome the pesky SS half-squads. 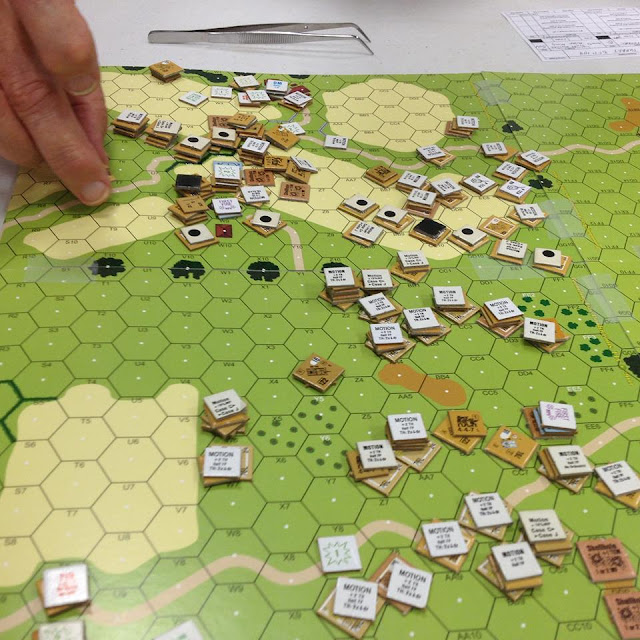 A bit of TMI will follow. I took a bio break and as I left the bathroom...I lost my balance and nearly hit the door frame. I was overcome with dizziness. I attributed it to not eating since lunch and sitting for the past 5 hours...you know...normal ASL Tournament stuff.

I sat back down at the table and struggled to keep my focus as Jim and Allen traded shots and asked me for the appropriate acquisition counters...A's became C's and DD's became F's as my head swam and I thought I would lose consciousness...

Yep...it was rapidly becoming a problem. I tried standing up and trying to shake it off...but nothing was working and I honestly...thought...I might need to go to the hospital. Yeah...this 50 year old thought he was stroking out.

Jim and Allen had begun to notice that something wasn't right with me...so I told them I needed to exit the game  and go lie down. I'd be back if I could.

This left Allen to deal with a huge Russian force all by himself.

Well...I returned to my room and was unable to even sit up until about 1:00 AM. As it turns out, I had a mild case of food poisoning from my lunch. I'm thinking the pico de gallo got me...but it laid me low. The next morning...I packed up and returned to Tulsa...my tournament was over.

Jim and Allen played the game up until the end of Turn 3 after Jim's Germans destroyed a large number of Russian tanks in a ROF festival of pain.

So the win went to Jim Ferrell and much deserved given the herculean task it was to play the solo defender. 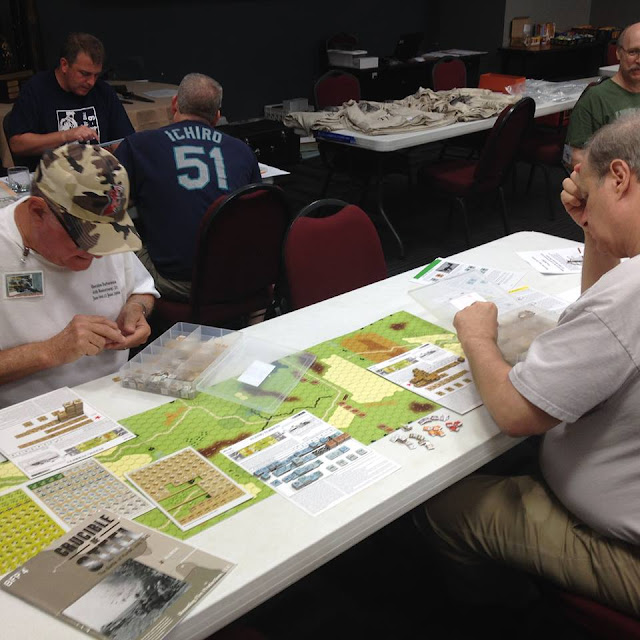 Despite becoming ill...I had a great time playing this scenario with two awesome, veteran players. Many thanks to Allen and Jim for a great game and for putting away all the counters following the game. That single act was such a relief as I packed up to head home the following morning. Very much appreciated gentlemen! 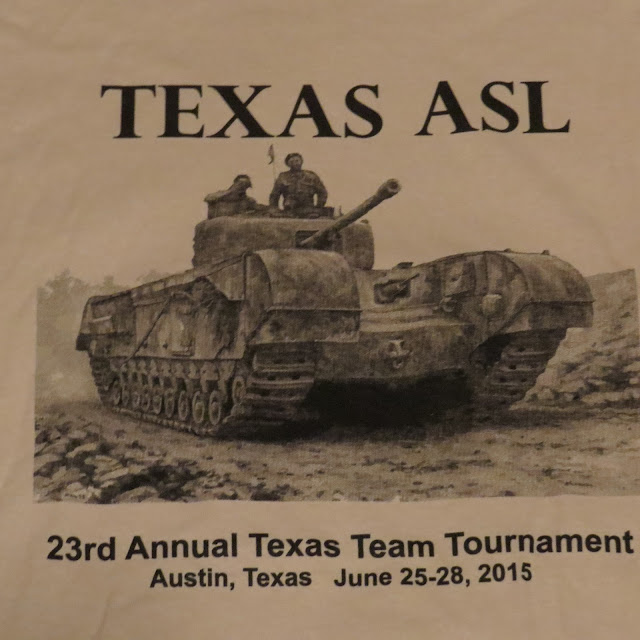 Ok...time to start planning for next year's tournament...(and pack my own lunches...)

Posted by GrumbleJones at 9:18 PM